Check out your perfect boyfriend among the two Hollywood actors! Is it Brad Pitt or Dwayne Johnson? William Bradley Pitt, a talented American Hollywood actor has appeared in many movies. He has killed it every time on screen. If you want a man with a gentle and classy attitude, then Brad is the perfect person. He can romance with you anytime, and take care of you. You are never going to feel bored with him, and he will always make you smile with his humor. If you are a person fond of acting, then he can give some lessons too. Many of his fans dream of having him as their boyfriend. After all, many girls do admire a charming and understanding boyfriend like Brad Pitt.

On the other hand, Dwayne “Rock” Johnson, the Hollywood actor and a retired professional wrestler, has won many hearts too. He is super enthusiastic and energetic. If you are a person who is energetic too, then you both are a perfect match. Rock can not only be your perfect boyfriend but also your gym partner. You guys can workout together. He is really understanding and caring, and that can add a plus point to your boyfriend’s checklist.

Who between the two do you want to make your boyfriend? Let us know in the comment section down below! 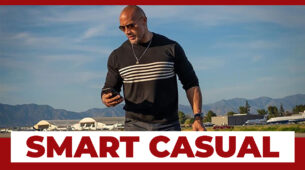