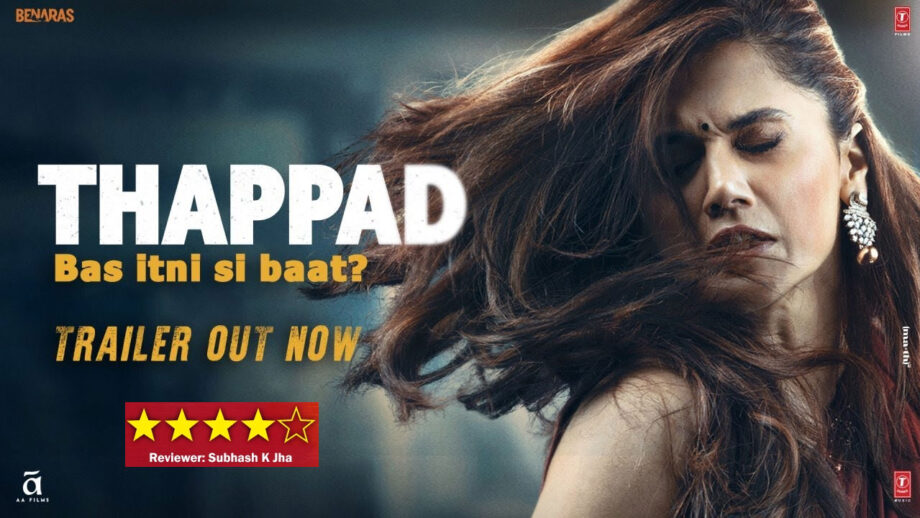 Here’s the thing. Anubhav Sinha’s two previous works Mulk and Article 15 dealt with heavyweight issues, namely the communal divide and the caste system. Thappad, as shown in the trailer, is about a slap.

The husband (played by the very talented semi-newcomer Pavail Gulati) who is not a cad, slaps his wife at a business party. Much to his horror and the outraged reaction of both the families, she files for a divorce. As simple as that. There are loud sniggers from people around the wife asking if she is not over-reacting.

This is the reaction Anubhav Sinha’s fights in this plaintive plea against patriarchy gives. The trailer is done in darkened shades suggesting a deeprooted malaise. Sinha places his female hero, the ever-dependable Taapsee Pannu above the simmering gender prejudices. She is a well-to-do, well-placed wife of a loving husband who in an impulsive fit of rage, slaps his wife.

Taapsee Pannu’s lawyer, her mom (Ratna Pathak Shah) are all shown to be shocked by the wife’s decision to divorce her husband for a slap. The smoothly-edited trailer creates a huddle of hurdles for the wife’s character. She is at the risk of looking foolishly misguided. But she is determined to fight it out.

Yeah, that one slap. Because it reminds her of all that’s wrong with her life and marriage.

“I don’t love you anymore,” she declares to her husband. Watching the trailer, I felt sorry for the husband. He slapped his wife. But he doesn’t know what hit him. Anubhav Sinha seems to be treading on much thinner ice in Thappad than in his earlier films. The questions that he raises this time are short-term afflictions with far-reaching ramifications.

I am reminded of a Swedish film Force Majeure where during a vacation in the snow, the father of the family bolts with his phone when the family is faced with a potentially catastrophic avalanche. It’s not what he does, it’s more about what the gesture applies, that destroys the marriage.

Taapsee looks gloriously glamorous as an ‘aware’ wife in a well-to-do family battling what seems to be ‘just’ a slap.

Hota hai, the characters around her, all played by fine actors, tell her.