Poonam Pandey in her seducing poses The bold and sexy Poonam Pandey (28) is an actress and model most loved for her toned and hot body. Poonam featured in the movie `Nasha’ playing the role of a school teacher, later being in a relationship with one of her students. She never fails to win everyone’s hearts by her swamping her Instagram account by her sultry captures.

The model and actress Poonam came in the lime light after she promised to disrobe if the Indian cricket Team won the 2011 Cricket world Cup. She is on heights since then. Her hotness is also being a part of her talent as for now. Poonam has also been a former Kingfisher model. She was also on talks for her disputed statements. After 2 weeks of marriage, Poonam Pandey gets husband Sam Bombay arrested, find out why 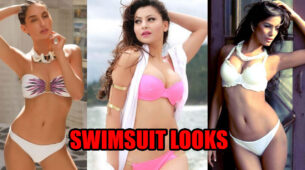