Are BTS Suga and Ed Sheeran working together? Readers, you may or may not be a fan of Ed Sheeran but there’s absolutely no way you can dislike the vibrancy and the positive aura around his song ‘Despacito’ which turned him into an overnight global sensation. Ed Sheeran is someone whose fan following isn’t just limited to normal music lovers. His fan following spreads evenly within the global music industry as well and one person who has always expressed his admiration for ED is BTS fame Suga.

So, the bottomline is, are Suga and Ed Sheeran coming together?

But hey hang on, better late than never right? It will truly be a musical delight for fans if Ed and Suga come together for a project. 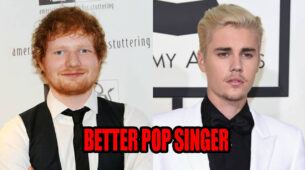 Ed Sheeran VS Justin Bieber: Who's a better pop singer?