Noted singer Shael and actor-director Sameksha created magic with their first single Tere Naal a few months back and now the duo is back with their next single titled ‘Tu MILAA To’. While Tere Naal was a tribute to the doctors worldwide who have given their undivided attention to fight the pandemic, the second single will focus on living life full of happiness and say no to suicide. Shael and Sameksha have beautifully performed and put this video to life during the ‘Suicide Prevention Month’.

“I love to sing ballet and romantic songs as they touch people’s heart. I prefer having a heart touching story with every song that I sing. Music takes me to a happy and satisfying space and I like to create and sing music that touches souls and hearts. While I sang this melodious number, Sameksha took charge of the location, direction, make up and costumes. She has basically done everything single handedly. I am happy to have a director at home who is like a pool of talent. Like a dutiful husband I listen to my wife off screen and even on screen while she is directing. I am a director’s actor and Sameksha totally understands my way of functioning”, says Shael.

Commenting on the direction of the song Sameksha says, “This is the second song where we successfully shot without a single crew member. It was just our house staff who helped us shoot for portions where Shael and I were in same frame. We opted for real locations in Singapore this time. Needless to say it was a great experience and things just double up with fun when you get to work with your husband. I am hopeful that ‘Tu MILAA To’ will create an impact and bestow love and happiness in the hearts of people”.

The story of the song is a fast paced thriller, where the protagonist, fed up from his life ends up giving his own death contract within 7 days to a professional killer. However during that time, he ends up falling for a girl (Sameksha) and eventually realizes that love can draw happiness and can ignite fire and will to live even in a dormant soul. The story takes a thrilling turn towards the end keeping the audience on the edge-of-the-seat.

Ask her if there were any creative differences, the actor laughs, “Shael is a disciplined individual who without any questions does what he is supposed to do on sets. He follows my instructions and enhances everything but after the shoot we do have our share of cute and sweet fights when it comes to the edits. He is simply a delight to work with. As for the story, I wanted a different end where my character heals the protagonist but Shael wanted the video to end in a fast paced thrilling way, so we decided to go his way and the results have come out very well”, she sums up. 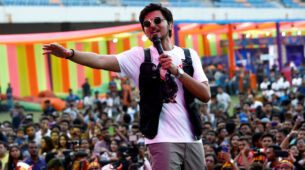 #MeToo: Abhijeet Bhattacharya molested me back in 2004 –Porus actress, Sameksha Sameksha joins the cast of Discovery JEET’s Battle of Saragarhi