A voice that made us all addicted to and then just went poof! No other than Sonu Nigam used to be the only name we all were familiar with during the 2000s. His first stage performance started as a kid when he, along with his father, sung the famous Rafi song Kya Hua Tera Wada. And so became a voice influenced and higher compared to Mohammed Rafi. So much so that he is called the Modern Rafi and Lord of Chords. He has a unique style to his singing, and the moment the humming gets to your ears; you are all wondering what a talented personality he is.

And with such popularity and adoration from the masses comes crazy fan moments as well. Some artists are bestowed upon with some really over the top craziness from their good wishers like stalking and getting letters written with blood. But these are very extreme cases. There are a majority of times when a fan shows a cute gesture like writing a poem dedicated to their icon or wearing a t-shirt. But every artist has one and so did Sonu Nigam. Blessed with countless gestures from his fans like asking for an autograph or a selfie-and many more.

Below are a few to how Sonu Nigam has reacted to such times. Also, what was his reply in return? Sometimes it was adorable, but when a fan crossed his limits, it was harsh as well. Below are a few proofs of Sonu Nigam and his fan moments. 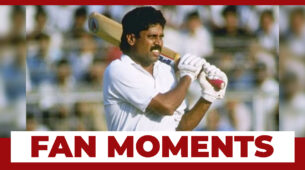