The upcoming episode of MTV Splistvilla X2 will see things taking a tensed and a dramatic turn in the villa! While the show is gearing for up its semi-finale, it’s time to fight it out the hardest way to fetch the winner title! This Friday, the viewers will get to see some of the darkest confessions and revelations that left both the hosts, Sunny Leone and Rannvijay Singha furious.

It all started when Shrey Mittal drew Rannvijay and Sunny’s attention to the growing discomfort that the girls in the villa have been facing in the recent past. Shrey decided to speak up, come in support of the girls and revealed that Ankush Rampal has been disrespecting girls, passing immoral comments on them in the house. As a result of this, the girls in the villa decided to vote him out. Rannvijay took this issue against Ankush, giving him an earful. He said, “A woman is not an object. She is not something; she is someone. You treat a woman with respect. She is not your toy. She doesn’t owe you anything just cause you are a man. When she comes to you for comfort, you listen to her, you don’t make a move on her. Grow up and start treating women how they deserve to be treated.”

Amidst this, the contestants will have to pass the Test Your Bond challenge with one of the most entertaining tasks of this season ‘Tu tu mai mai’, where the boys of the villa have to wear the tutus that are used in the ballet dance. The boys have to jump into the water to collect the tutus which has a letter attached to it. After collecting the tutus, the boys have to get out of the pool, wear the tutus and cross a ramp where all the ideal matches are standing to create hurdles for the boys. All the ideal matches will be given water balloons and pichkaris to as an object of distraction for the boys. Once the boys cross the hurdles, they have to go towards the girls who are standing with the blow dryers helping them to dry their tutus. The couple who collects maximum tutus and make words with the letters on it will win. 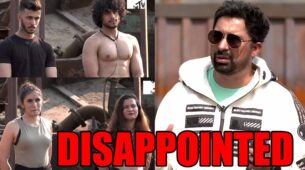