Bidaai gave me the faith, hope and courage to put all my energies and focus on work: Producer Rajan Shahi | IWMBuzz
Subscribe Now
Television | Personalities

Producer Rajan Shahi who became one of the first technicians to successfully grow as Producer with the show Sapna Babul Ka… Bidaai gets nostalgic in his exclusive interview with IWMBuzz.com. 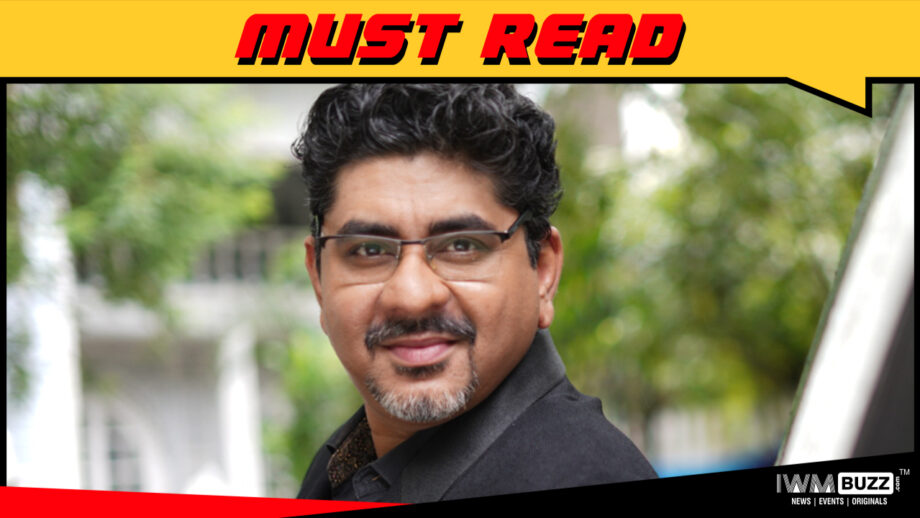 Sapna Babul Ka.. Bidaai the show that was launched in the year 2007 by Rajan Shahi’s Director’s Kut Productions for Star Plus, was a gamechanger for Indian television, after which many shows based on simplicity have emerged.

Now, with the Nation facing the lockdown with no new content being available on television, Bidaai sees a re-run and it has brought back some amazing nostalgic memories related to the making of the show, its success story and above all, on the formation of the renowned company Director’s Kut Productions.

It has also given Producer Rajan Shahi the credit of becoming one of the first successful technicians (Director) to have made it big as Producer.

At this outset, IWMBuzz.com got into an in-depth exclusive talk with Producer Rajan Shahi who shared a lot of memorable anecdotes on Bidaai, on its actors, and how Bidaai had given a platform for many people’s growth, who even today stand by him as pillars.

Above all, we also learnt about how Bidaai has been the interlink to the now successful DKP show Yeh Rishta Kya Kehlata Hai.

Excerpts from the interview:

How do you feel with the re-run of your first show as Producer Bidaai?

I am getting a lot of calls for Sapna Babul Ka.. Bidaai, now that it is on air again. A certain new generation is watching Bidaai all over again. So it takes me back into the memory lane.

When Bidaai was launched in the year 2007, I was directing popular shows and was known as a Series Director. I had a good reputation at that time for being a technician. So one of the most defining moments in my life was when I decided to switch from direction to production. I will say this because, at that time, very few technicians were becoming Producers. It was unheard of in the year 2007, that a technician would become a Producer, that too on a very big platform like Star Plus which was known to predominantly work with only the top Producers. There were a lot of people telling me then, that if I don’t succeed as Producer, my career as Director will be finished. So I can say that this was a life-changing moment for me, both personally and professionally.

Thanks to Mr Uday Shankar of Star Plus, who took a huge calculated risk when he gave me, a technician, the chance to produce a huge show. I will always be grateful to Mr Vivek Behl, who was the Programming Head of Star Plus at that time for being instrumental in giving me this break. So I started the show with a limited bank balance, with no office, and not even a company registered on my name. So the decision was possible, thanks to my parents and a core team, which even after 13 years is standing next to me. I took their advice, their support and decided to plunge into production. My last show as Series Director was Sapna Babul Ka.. Bidaai. 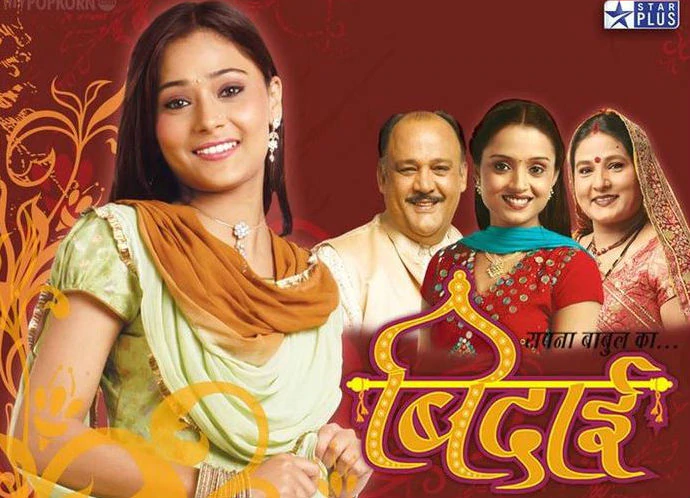 So what do you think worked for Bidaai at that time and made it iconic?

At that particular phase in 2007, Bidaai was a risky show to make. Contrary to the kind of shows made at that time, which were very dramatic, Bidaai became a game-changer. Its simplicity, well-etched out characters and interesting inter-relationships worked in its favour. The casting was also a huge amalgamation of seasoned as well as new actors. We had actors like Alok Nath, Seema Kapoor, Vibha Chibber, Avinash Wadhawan but also had newcomers in Angad Hasija, Sara Khan, Parul Chauhan, Kinshuk Mahajan.

Bidaai started the trend of simplicity, which had long gone out of television. The girl-next-door trend was revived.

One memory I still remember was from the very first press conference on the set, when we had even before the show was on air. There were some people from the media who were very rude to the girls, Sara and Parul. They came and asked me whether these two are really my lead girls. I remember that both the girls rushed into the room and started crying. I had to rush out of the press conference midway, to talk to them. I told them to believe in what we are doing, and there will come a day when the same journalists will wait to ask them questions. They wiped their tears, came out of the room and continued with the press conference. See how destiny took them forward through the show. The girls went on to become the new mantra of the television industry. Bidaai started the trend of simplicity, which had long gone out of television. The girl-next-door trend was revived.

Take us through the achievements that Bidaai brought in…

One of the most unique features of Bidaai was that it was a great platform for actors. Through this show, new faces were launched, and experienced actors were relaunched. I remember Seemaji did not want to get back to TV. I had to convince her. All of us know that Parul, Sara, Angad and Kinshuk went on to become faces that ruled television. Even for actors like Ashita Dhawan and Naveen Saini, this was a huge show. I am happy that all these people together created history on television.

Bidaai ended after a three year successful run on an average of more than 4+ TVR, with the last episode as high as 5.6, which was unheard of

How was it starting a show for the first time as Producer?

Like I said, it was a huge calculative risk to start production. I had to bank on my core team, Ranjeet Agarwal, Vivek Jain, Romesh Kalra, Aarif Sheikh and their respective teams. It was not only the starting of a new show, but it was the start of a new company too. I remember that in 45 days of notice, we had to come on air.

One interesting aspect is that Writer Pearl Grey (Rajan’s ex-wife) was the one who came up with the idea of naming the company as Director’s Kut Productions. She was into numerology and it was her suggestion for which I will always be thankful and grateful. I was very lucky at that time, and after working for 13 years as technician there was a lot of good-will that had generated within the industry. So the good-will and wishes proved to be the biggest asset that I had and even now have. The team of writers, creatives were formed overnight.

Zama Habib, Writer of Bidaai needs a special mention here. He later went on to produce big shows like Sasural Genda Phool, Nimki Mukhiya etc. Till date, he is a core part of Director’s Kut Productions in the writing team of Yeh Rishta Kya Kehlata Hai and Yeh Rishtey Hain Pyaar Ke. Zama Sir was one of the strongest pillars in the writing of Bidaai. His unconditional support will always be valued. The associations which started from Bidaai have continued.

To tell you more, Samir Onkar made his debut as Supervising Producer with Bidaai. And today, we have him in the integral cast of our show Yeh Rishta Kya Kehlata Hai. Bidaai has given many the platform for work and growth, and that makes me happier. Take us through the great memories of launching Yeh Rishta Kya Kehlata Hai amidst the success of Bidaai?

One of the most memorable moments for me and for my team was the day when Bidaai and Yeh Rishta Kya Kehlata Hai became #1shows across India with the same TRP of 7.1. I remember that the entire teams of both shows had partied and celebrated a lot. There was always a great connect between actors and units of the two shows. No celebration would happen on Yeh Rishta without Bidaai, and the same vice-versa.

Why did you not make a sequel to Bidaai?

Bidaai ended after a three year successful run on an average of more than 4+ TVR, with the last episode as high as 5.6, which was unheard of (we wonder even now, as to why Bidaai ended). Yes, till date, it is true that there is a lot of demand for a sequel to Bidaai. The expectation and desire coming from fans have always been there.

One of the main reasons why I never experimented with Bidaai 2 was that I never came across a script that really interested me to go up for a sequel. I, as a maker, have always been particular about the script.

When Bidaai was on air and running really well, I got a lot of offers for new shows across channels. But only after Bidaai ran successfully for two years, did I come up with my next show Yeh Rishta Kya Kehlata Hai. After 10 years of successful running of Yeh Rishta, I took the plunge to launch the spin-off in the form of Yeh Rishtey Hain Pyaar Ke. So the script should be really solid.

Secondly, maybe there is a fear that with the kind of repercussion and kind of landmark Bidaai got us, will the same kind of success be got with the sequel. I have always felt that the brand name needs to be alive always. I did not want to come up with a hurried version in order to be there, and in the face of it, wipe out the success and brand that Bidaai had created. But in life, never say never. The day I get a very good script for Bidaai 2, I will take the plunge. Star Plus has always been supportive of Bidaai 2 coming. You never know what happens in future about this. You are again taking the one hour slot with Anupamaa in the near future.

One more unique thing is now happening with the launch of Anupamaa. For Yeh Rishta Kya Kehlata Hai, Bidaai came as a huge support system and lucky charm as I said earlier. We developed the one hour slot then. A lot of things are again happening in a very karmic manner, I would say.

Today Yeh Rishta has been supporting Anupamaa. Once the lockdown phase is over and Anupamaa is all set for launch, we will again go back to the one-hour slot format. After so many years, we will have a show at the Bidaai slot in Anupamaa. That will be a huge moment for us.

At the time of launch of Bidaai, I took a calculative risk and was also going through a challenging phase on the personal front. Bidaai gave me the faith, hope and courage to put all my energies and focus on work again. And now, with whatever is happening during the launch of Anupamaa, the show has given me the focus that I need to look forward to. In the current phase also, there are a lot of personal as well as professional challenges that I am going through and Anupamaa has given me the support that I am looking for. A lot of people who have watched the initial rushes of Anupamaa tell me that there is a lot of similarity in terms of emotions and feel between Bidaai and Anupamaa.

So I will always say that all my shows starting from Bidaai to Anupamaa (when it will launch) will have a special interconnection which will be really emotional for one and all.