With a celebratory affair, the post leap phase will open up in the Star Plus show. We had written about Uma (Avinesh Rekhi) focussing on becoming popular, with his role model being the dynamic entrepreneur Meera Mithal (Kangna Sharma).

We now hear of the post leap story line starting with the second anniversary of Uma!!

The point to be noted here is that the anniversary will not be of Uma and Kanak (Rhea Sharma), but that of Uma and Meera!!

Well, the introductory sequence of the post leap phase will have the two of them celebrating their second anniversary…

A source states, “There will be entertaining drama in the sequence. Uma and Meera will be shown celebrating their moment. The shocker value will be provided by Kanak who will also be present at the ceremony. Kanak will be called by Meera.”

Well, while the post leap phase will take centre stage this way, the creative team will keep the main story of how Uma and Meera got married under wraps.

What will happen when Uma and Kanak come face to face again? 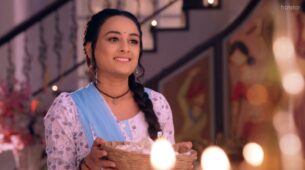