Kasautii Zindagii Kay 23 August 2019 Written Update of today’s episode we see Prerna feels bad for misunderstanding Bajaj and thinking of him as the bad guy. Today’s Kasautii Zindagii Kay 23 August episode begins with Maasiji fearing that Mohini was capable of exposing her. She was sure that Mohini would not expose them as due to her hidden motive. The doctor informed Prerna (Erica Fernandes) that they had to start some medication to get Bajaj conscious.

Prerna went to meet Bajaj and felt guilty for misunderstanding his intentions. She said she would not be able to hate him after that. Tanvi came and got shocked to see Prerna caressing Bajaj’s hand. Anurag told Anupam that he cared for Prerna and her family and should be in India.

Maasiji wondered if she should take the complaint back or not. Nivedita asked Mohini about talking sweetly with Maasiji. Mohini decided not to tell the truth to Nivedita and avoided her question. Prerna confronted Maasiji about lodging complaint against her mother. Maasiji said Bajaj would do the same after getting conscious.

She revealed she had hired a lawyer to prove Veena wanted to sabotage the party. Tanvi met Bajaj in the hospital who was still unconscious. Maasiji continued to manipulate her actions. She offered her help by recommending her lawyers. The written update of 23 August 2019 Kasautii Zindagii Kay episode full story ends here.

In the upcoming episode of Kasautii Zindagii Kay, watch Anurag decided to get Veena out of the jail. Stay tuned! 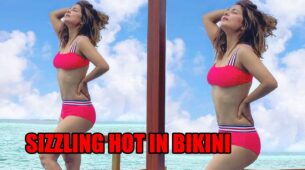