Technology has paved a way for many to create a niche of their own and establish a genuine career out of it. Women in India, especially wives & mothers, are not to be left behind and are reshaping their career using popular social media platforms like YouTube. 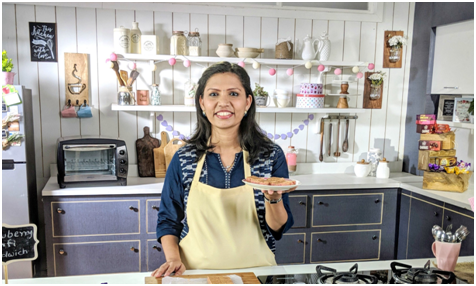 Today, we bring to you the journey of one such female youtuber who continues to be an inspiration for housewives and mothers alike. Indian YouTuber Kabita Singh is a chef with over 4.4 million subscribers. She started out with her Youtube channel ‘Kabita’s Kitchen’ in 2014 and is now counted among the top 5 female youtubers in India.

Culinary Queen Kabita Singh’s main motivation behind starting her YouTube channel is her love for food. Simple, Easy, Authentic – is her channel’s motto and something she incorporates in her food recipe videos. Another important factor while deciding to create content for YouTube was that she realized there was a gap and she could create a niche of her own.

If you watch her recipes, they are easy to cook with the ingredients that are easily available at your home. And that’s exactly what she aims for!

Kabita always had a passion for cooking and enjoyed doing it with her mother; however with her banking job she couldn’t pursue it any further. After getting married in 2009, she settled in UK. While there, she was unhappy with the Indian food available and started watching Indian recipes on YouTube to follow. She quit her job when she had a baby to take care of him. When he started schooling, Kabita was left with lots of time on her hands which she decided to make use of it by going back to her first love, cooking. On November 2 2014 she posted her first video on YouTube.

Running a successful youtube channel is no easy feat especially if you are a mother two young kids. But Kabita Singh has a pretty good handle on managing her career and personal life. In fact, she credits motherhood for making her look at life differently and inspiring her to start a youtube channel.

Kabita Singh started out slow but within 3 years in 2017, she managed to hit the milestone of 1 million subscribers with her channel. Two years later and the count has tripled in numbers.

More power to you, Kabita!