Celina Jaitley On Her Battle With Depression Celina Jaitley, who plays a troubled daughter coping with an absentee father in ZEE5’s new short film Season’s Greeting has come clean on her battle with depression and how she coped with it.

It was multiple setbacks in her life that drove her to depression. “I attended my father’s military honour funeral with two babies in the seventh month of my pregnancy, following which we lost one baby and shortly after that my mother under very tragic circumstances.”

The loss of both parents so quickly one after the other made Celina a nervous wreck. “When Mom and Dad passed away I went into severe depression, which rendered me completely shattered. It reached a point where I had a minor accident while driving.”

This is when Celina’s husband Peter took charge. “That’s when Peter decided that it would be a good idea to disconnect from Dubai and move back to Austria to our alpine estate to recover and get treatment, and reboot.”

She cannot say enough about her husband’s support through this dark phase. “Peter was a chief commercial officer of one of the biggest companies in the world when he resigned to support me all through my ordeal. We both were grieving for our son and my parents.”

Celina feels it is important for influencers to speak of their health issues. “Mental health is hardly ever brought up. Good that Deepika Padukone spoke about. depression, like the Coronavirus, can hit anyone. Just because one is privileged and able to buy one’s happiness, it doesn’t follow that depression will stay away from you.” 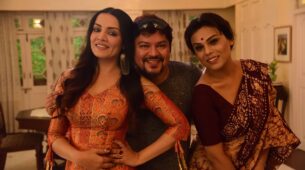 Hundred percent curfew and self-isolation are the only responsible way to fight the virus: Celina Jaitley