Kehne Ko Humsafar Hain 3 is being reviewed by IWMBuzz.com. Read it here. Brace yourself for more confusions in ALTBalaji and ZEE5’s Kehne Ko Humsafar Hain 3. If you felt the story had hit the peak of complications in Season 2, you are totally wrong!! Season 3 will blow you off your carpet from its first scene and you as a viewer are sure to compare the characters you have seen earlier to what they have become now!!

Before we begin, a DISCLAIMER to all the Ronit Roy and Rohit Mehra fans!! You are in for a rude shock as the sophistication that Rohit Mehra carried in the first two seasons with respect to his look is all gone here!! If you felt Rohit was a pure lover even when he wronged his wife Poonam and fell for Ana, please remember that all of that was in the past!! You will see Rohit doing all the debaucherous and crazy stuff in Season 3, and there are times you will even feel like puking over his acts!! Yes, I mean it when I say it… But if you are looking at the sheer performer in the class actor Ronit Roy and the ease with which he has moulded into this new avatar of Rohit, you are in for a joyous ride. So determine it in the mind before you give the Season 3 a watch!!

Getting to the story now, as we all know, Ana (Mona Singh) has moved on and parted ways from Rohit after knowing of the one night stand between Poonam and Rohit. Ana takes this decision even when she is pregnant and that speaks a lot about the woman’s courage.

The story moves past four years and what we see is a drastic change in Rohit Mehra (Ronit Roy). He is a smoker, a drunkard, a loser in life who can kiss up and sleep with girls who are half his age. The irony is that the man who was always a giver, is now a beggar, and pleads his mother for money. A pity this!!

Ana (Mona Singh) has moved to Qatar and has her son born to Rohit, named Kabir. Kabir we should say is an unlucky boy as he is deprived of his mother’s love. Though Ana from the exterior seems to have moved on to build her own professional empire, she is stuck for real and does not even have emotions as a mother. She has never hugged her kid and has no motherly feelings for him.

Poonam (Gurdeep Kohli) has married Abhi (Sayush Sanjay Nayyar) who has supported her and understood her one night stand too with Rohit. Incredible love, this!! But yes, Poonam who looks younger and more beautiful in the stunning attires she wears to please her young hubby is one insecure woman who lives on the edge when it comes to sustaining her married life. We only hope she acts mature for her age as the story goes on!!

Harry (Apurva Agnihotri) has always been the confidante, friend and guide for Ana and she continues to work for him in Qatar. Harry is all set to propose Ana in this season and we welcome this change.

Bani (Pooja Banerjee) is another huge bundle of mess, having walked the path that Ana treaded on earlier. However, the difference here is that Bani’s lover is a hen-pecked husband who probably lives under the sunshine of his wealthy wife’s money. Hence the man has no guts to call off his marriage and move with Bani, like how Rohit did.

We have a very important new character being introduced in this season, that of Amaira played by Aditi Vasudev. She is the new bitch if we can call her that; she is crazy in love with Rohit, and can do anything to get him. Soaked in richness, Amaira goes to the extent of tracking Rohit with a tracker attached to his mobile. This girl can go to any heights, and the worst part is that Rohit got close to her as she has an uncanny resemblance to Ana!! (We hear a bell ring here, we will let you know of this later)

This Season also gets viewers abreast with Ana’s troubled past and childhood. She has lived her life in an orphanage after being dumped by her filthy rich mother. The mother who went on to marry someone else has however carried out the duty of funding Ana for her studies and future. Ana holds this baggage and this actually reflects in the kind of mother she has been to her child.

Now, we have Amaira’s mother (played by Sharon Prabhakar) who is shown having a problematic life with her husband. Amaira’s parents at loggerheads has affected Amaira very badly. And this answers her possessiveness and obsession for Rohit.

We get to the point where we spoke of a bell ringing. As a viewer, I feel that the story ahead has something to do with Amaira’s mother and Ana. I might be wrong here, but I feel that Amaira’s mother is actually Ana’s mother. Why do I say this? First of all, the story narrative has derived and brought in an uncanny resemblance between Ana and Amaira, and might be that this runs in their genes!! We know of Ana’s mother being super-rich and this is one more reason why we say so!! And above all, Amaira’s mother sure has huge marital problems with her husband, and this might have arisen from her troublesome past. Whatever it turns out to be, my money is on this though!!

Getting to the narrative, Ana is forced to come back to Delhi and is back to face the music that she had run away from!! The awkwardness is seen clearly in every relationship, whether it is between Ana and Poonam or Ana and Rohit.

Ana wants a divorce from Rohit and Rohit is not ready to give her that!! And this creates a huge rift!! Well, the fact remains that both Ana and Rohit have never succeeded in moving on. Rohit still has Ana’s picture on his phone, and gets close to Amaira every time as he sees Ana in her. Ana on the other hand, chooses to break down before the same person (Rohit) that she pretended to hate for all the four years. She is weak from within and craves for the love of Rohit. After all, the love was genuine you see…

Season 3 of Kehne Ko Humsafar Hain has 10 episodes which can be watched now. We hear that there are 8 more to drop sometime in July. And as usual, there is a cliffhanger at which the 10th episode ends.

Ana has had a weak moment with Rohit where she bursts out her emotions. But her mind tells her to move on!! She goes to a guy’s house, rings on the doorbell and asks him whether she can be with him all her life!! I guess it is Harry and not Rohit!! But you never know. Whoever it is, it further will add to the complication galore…

Amaira is sure to be the thorn that will be extremely painful for Rohit to remove and throw off!! She can go to any extreme to get what she wants and there is going to be a lot of explosions to come from this girl for sure!!

As for Poonam and Abhi, their insecurities are only creeping up!!

Coming to performances now, a top-notch performance by Ronit Roy!! Probably his best as an actor in this series is in Season 3. Kudos to him for throwing off the sophistication, and accepting the crude and sexy street boy character with elan. He is top-notch in every scene and in every emotion!!

Mona Singh is again fabulous and brings out the pain in Ana effortlessly. Her breakdown scene at Bani’s home and in the 10th episode was simply outstanding!!

Gurdeep Kohli is the dark horse as always in this series Kehne Ko Humsafar Hain. Poonam has come a long way after being betrayed by her husband. And Gurdeep looks stunningly hot in her new avatar, and is perfect in her expressions, whether it is of sheer romance or of the insecurity baggage that she carries.

Apurva Agnihotri is good again!! Pooja Banerjee has finally got her due this season and has many scenes that she can call it her own!! Palak Jain, Neena Cheema are good. Sayush Sanjay Nayyar proves again that he is a good actor!!

And last but not the least, Aditi Vasudev steals the show is what I will say!! Her attitude, her eye and facial expressions and the manner in which she has carried this psychopath character has been outstanding.

Anjum Fakih as one of the one-night stands of Rohit does a good job. She is again at her seductive best.

The one thing that I disliked is the too-jarring kiss and sex scenes of Rohit with his girls. It happens anywhere and everywhere and this is a pity to the character he was!! But yes, agreed that he has gone cheap and this is what Ana and Poonam point out too. A typical example of how love can break a man and change him too!!

We have not seen much of Sharon Prabhakar, Aaradhana Uppal. Mihir Mishra is yet to be seen.

Overall, this ALTBalaji and ZEE5 presentation need to be credited for the impact it has made on the digital medium. Its storytelling has all the power and kudos to Jaya Misra for this. The story has the fire in it to carry on for more seasons and viewers will surely accept what is coming with full faith!! 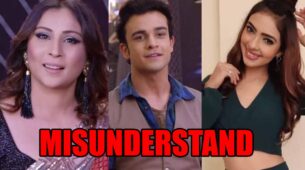 Erica Fernandes And Pooja Banerjee's Most Adorable Moments Together