The music video of the song to be exclusively aired on MTV & MTV Beats on 3rd, 4th and 5th April 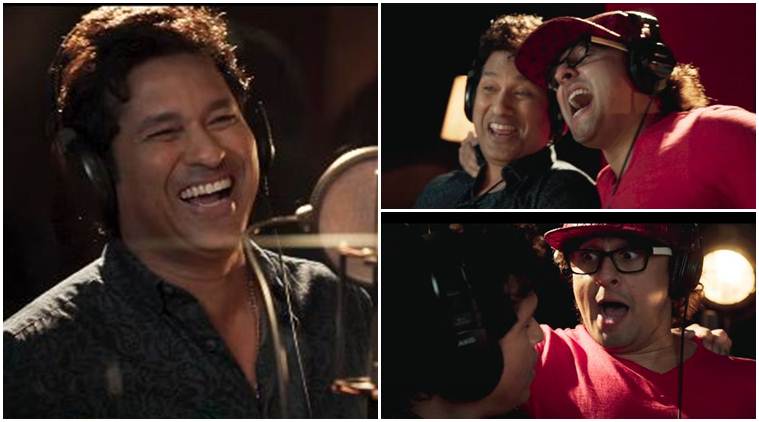 After mesmerizing millions across the world with his incredible talent on the cricket field, Master Blaster Sachin Tendulkar is now set to appear in an all new avatar as he turns a Singer just for his digital-innings. Opting for the mike instead of a bat this time, Sachin is seen crooning a lively number to promote his recently launched digital platform – 100MB. Aptly named Sachin’s Cricketwali Beat (after all, how can one ever separate Sachin from cricket?), the song will see Sachin exercising his vocal chords alongside singing superstar Sonu Nigam. Conceived and composed by Shamir Tandon, this partnership is sure to rake in all the musical runs for sure.

Through the song Sachin will not only be heard enjoying the feel of being on the cricket pitch but will also be heard paying tribute to the country’s greatest cricketing stars who have glorified the sport. Sachin’s dream was to lift the World Cup and the song was released on the 6th anniversary of India’s win in 2011. To express his gratitude he has mentioned every single player he played his 6 World Cups with. The song is irrepressibly peppy and foot- tapping and boasts of a playful jugalbandi between the Master Blaster and the Music Rockstar! The music video will be exclusively available on MTV and MTV Beats, the country’s leading music channel on 3rd, 4th and 5th April.

Commenting on his musical debut, Sachin Tendulkar said, “Sachin’s Cricketwali Beat’ is a very upbeat and feel good number. It’s a unique collaboration with the supremely talented Sonu Nigam, specially made for my new app 100MB”. This is the first time the audience is going to see me sing and I hope all my fans enjoy listening to it as much as I enjoyed singing it.”

On collaborating with Sachin, Sonu Nigam said, “People fall in three categories – talented, genius and blessed. Sachin falls in the blessed category. I first heard him sing and told the composer Shamir Tandon that Sachin is one to whom God has given something extraordinary. He is blessed with something divine’