Prajakta Koli the YouTube sensation has entertained us with her quirks and intelligence for a long time. Here are some of her all-time best. Prajakta Koli, one of the leading women in the social media sphere and on YouTube, with a whopping four million subscribers on YouTube, has lately been noted for her involvement in many social movements that have started. She was initially known for spearheading a large part of the feminist movement, and now, with the current unsettling political scenario, she is one of the prime personalities caught up in it. However, on a lighter note, let’s take a nostalgic trip to the past and take a look at all the absolutely hilarious characters that she played when she was initially coming up. The 26 year old has a portfolio that she must be proud of now, but in the past this portfolio included only a year’s internship and a mildly successful YouTube channel. So, here’s a little blast from the past.

Prajakta’s initial videos included a lot of character based sketch comedies, something that is very common now, but back in the day she was one of the first to step into the scene. She is very popularly known for her relatable humour, with most of her videos including her playing various characters like watchmen and drivers. In some videos, she is seen collaborating with certain actors and actresses and interviews with International mega-comic Russell Peters and Jamaican sprint legend, Yohan Blake. Her journey has been crazy to say the least. 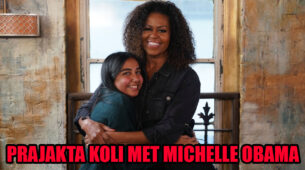