Find out why Hrithik Roshan started bodybuilding with Salman Khan Hrithik Roshan and Salman Khan are today two of the biggest superstars that we have in the country. While one is known for being a stupendous actor along with his exceptional ripped & chiseled physique with hard as rock abs, the other is known for his larger-than-life persona who can earn a box office hit just by gracing the screen with his presence.

But do you know a lot of credit for what Hrithik Roshan is today especially in terms of fitness goes to Salman Khan?

Yes, readers, that’s true. Hrithik had earlier told in an interview to Stardust that he and Salman Khan had actually met for the first time on the sets of Karan Arjun which was directed by Hrithik’s father, Rakesh Roshan. Hrithik was assisting his father in the project and that’s when Salman Khan motivated him to become an actor. Not just that, he had also mentioned in the interview about how Salman Khan would help him achieve body goals and a nice physique by making him train with him before the release of his debut film, Kaho Naa Pyaar Hai. Hrithik had also thanked Salman Khan for all these things when he had come to Salman Khan’s show Bigg Boss to promote his film Kaabil earlier. 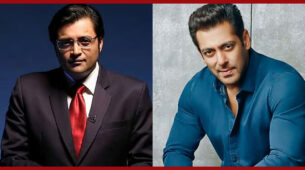