SRK has had a career graph like no other actor in Bollywood and his movies justify the stardom that he has achieved over the years. SRK, undoubtedly the king of romance, is the favorite of not only the Indians but his stardom is renowned worldwide. He has acted in hundreds of movies to date and his acting skills have been commendable in each and every one. You name it and he can act it!

Let’s take a look at the 5 best performances of SRK:

1.Kabhi Haan Kabhi Naa (1994): This movie released before SRK gained stardom. The emotions that he had portrayed were filled with serenity and very well received by the audience back then. 2.Devdas (2002): Directed by Sanjay Leela Bansali, this film is the first glimpse of grandeur, drama, chandeliers, and of course, SRK. He was seen as a tragic lover who tormented and destroyed himself after he lost Paro. A film of a lifetime. 3.Kal Ho Na Ho (2003): SRK’s role is synonymous to the role of the famous Rajesh Khanna in ‘Bawarchi’ and ‘Anand’ where the line “Zindagi badi honi chahiye, lambi nahin” precisely defines him. He’s an ailing person who architects to make the woman he loves marry her best friend for Aman (SRK). He’s shown as a giant hearted person who fills Naina’s (Preity Zinta) life with bliss. 4.Swades (2004): A film depicting patriotism, optimism, and one which overrules all obstacles is what Swades is. SRK is shown here as a project manager who’s associated with NASA and comes to India to take his nanny back and that changes his life forever. 5. Chak De India (2007): Filled with sports spirit, enthusiasm, will power and more – it’s a mandatory watch for not just sports lovers but every other person too. SRK is shown to present the role of the coach of India’s Women’s Hockey Team and his promising role has blown our mind. 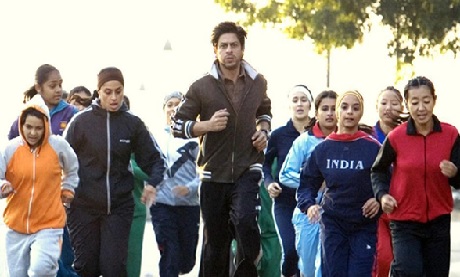