Subhash K Jha gets into a conversation with the veteran actress Shamila Tagore who turned 75 yesterday. 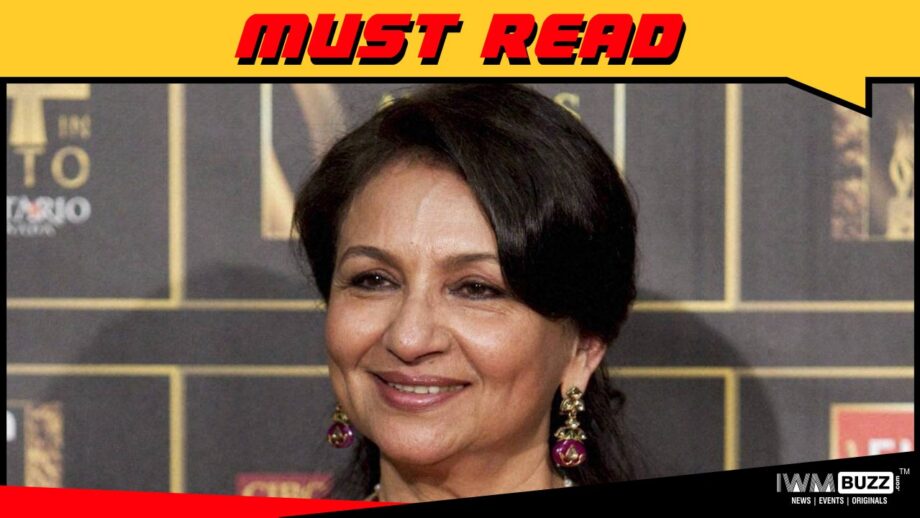 Interviewing Sharmila Tagore is always a dream come true. A favourite, she ruled my heart with her glamour and talent in the films of Satyajit Ray specially Apur Sansar, Shakti Samanta’a Aradhana and Amar Prem and Basu Bhattacharya’s Aavishkar and Grihapravesh.

No actress combines the best of the East and the West so fluently in her personality. As Sharmila turned 75 on December 8, we caught up for another revealing and articulate interview with the veteran personality.

Just like any other day!! I don’t allow myself to think about my age. Fortunately there is plenty to be done. My days are fuller than I can cope with. And I like it that way.

You are ageless and my absolute favourite!! My first crush.

Thank you. There were many like you. But nowadays you have to be careful about expressing your feelings (laughs).

Sadly we don’t see much of you on the screen these days?

This is not something peculiar to me. It happens to all actresses beyond a certain age in our cinema. Even Madhuri Dixit who is a lot younger has not done anything much in spite of Dedh Ishqiya.Whereras the rules are different for Mr Bachchan. He has directors like Shoojit Sircar calling him ‘Sir’ and writing roles for him.

He has worked hard to be where he is?

I mean, Mr Bachchan is definitely an icon. But the rules are different for the actresses. I believe Ribhu Dasgupta’s film Te3n was a remake of aKorean film. The original female protagonist has been turned into a male to accommodate Mr Bachchan. Who does these things for female actors in Hindi cinema? But then, on the other hand, who would go to see Pink if Mr. Bachchan didn’t play the lawyer? Cinema does reflect the reality in society. And I suppose in films they feel they cannot give a woman a role where she is so much in charge of the characters of the plot. In regional films the rules are different though. Older female characters do get to play substantial roles.

But older actors too are sidelined, besides Mr Bachchan?

That’s because of age and health. Rajesh Khanna and now Shashi Kapoor passed away. Dharmendra continues to be so much in demand in spite of his age. He is such a good human being. I guess there are some important personality traits common to people born on 8 December.

Yes indeed he shares his birth date with you?

(laughs) Indeed, he does. Dharamji has worked enough, done enough. He has earned this phase of retirement. I must tell you, Dharamji remains exceptionally popular everywhere. I was in Pheonix (US) recently. And I was asked about him everywhere. Everyone dotes on him there. There is a lot of goodwill for Dharamji. The same goes for my other favourite co-star Shashi Kapoor. They’ve both done a lot for the film industry. They will leave behind a great legacy.

Do you miss being on screen?

I don’t think so. I’ve never believed in being singlemindedly focused on my film career. Of course, I love acting and when I do a film I give all of myself. But cinema is not my be-all end-all. In that sense I am a bit of an accidental actress. I am interested in so many things. My work with theUNICEF, with NGOs, etc. keeps happening. I like to stand up for whatever I believe in.

How did you manage to hold your own in such a fiercely patriarchal film industry, doing female oriented films like Anupama, Aradhana, Amar Premand Charitraheen at a time when Hero was King?

Those times were different. The directors had more of a say. And the actors were very respectful of directorial impulses. Not that today a Sanjay Leela Bhansali has any less of a say. I really don’t know how or why some of my best Hindi films came after marriage. But even Vidya Balan has been able to hold her own in spite of marriage.

I think what went in my favour is that I didn’t withdraw from other activities after I married Tiger. I engaged with life. The quality of my work matters. And I do whatever I like. And I’ve never isolated myself from the real world. Even when I was working as a leading lady I didn’t restrict my interaction to the people I worked with. If today some public figures like to isolate themselves being surrounded by bouncers etc I say, that’s their choice. One can mingle with people without the danger of losing one’s privacy. I mean, I still can’t go to Lodhi Gardens for a picnic. But I can meet the people I want.

And yet there is unapproachable aura about you?

I have always wanted a normal life. I wanted to meet people from all walks of life even when I was working on the sets, and I made sure I did. In our times we saw India through our work.We shot in places like Meghalaya and Kashmir where there were no 5-star hotels those days. Today’s generation doesn’t get a chance to see the real India.

You were regarded as quite elitist among the heroines?

I missed talking and reading in Hindi. I was the only one who’d speak in English on the sets. But now everyone speaks in English. Even the Hindi dialogues are written in English. I guess our cinema has become more globalized. Most heroines are seen in gowns at awards functions. Some of us still prefer the saree. I think it’s desirable to stay in touch with our roots.

And now your eldest grandchild is getting ready for stardom?

Yes, Sara is all set to be an actor. How beautifully she has grown! She went to Columbia University. Now she wants to an actor. She is a clever girl.

How did you manage to balance a Satyajit Ray with a Manmohan Desai in your career?

I never wanted to be stereotyped. I wanted to play every woman. And I wanted to enjoy every aspect of being a woman. I wanted to have a family because I had grown up in a large family. I didn’t want to be only a career woman. Though I come from a middleclass family where all of us had to share everything, I never felt any insecurity about my career. I am not a high-maintenance person. I don’t need to have three airconditioners and five imported cars.

Did you have to work hard to be the person you aspired to be?

I only aspired to do my best in whatever I did. Even if I go for a book launch, I want to do my homework about the author. As a public figure I feel I owe it to those who place their trust in me. Nowadays I see people so unprepared for public events.

I wish I could travel more. As long as there’s life there are wishes and desires. I just take one day at a time. As for movies if something good came my way I’d do it. Otherwise I am fine with what I am doing. I’ve no time for regrets..

So no regrets about losing Khilona and Tere Mere Sapne?

(laughs) None at all.