When Maddock Films had announced ‘Arjun Patiala’, a lot was expected out of this comic piece. Add to that, the super success of movies like ‘Stree’ and ‘Luka Chuppi’ that enhanced and increased the expectations further. So does the film actually match up to the desired expectations or does it exceed the expectation level? Let’s find out.

The film is about this ‘Punjab di sher puttar’ inspector Arjun Patiala played by Diljit Singh, who earns the position of the head cop at Firozpur district and how? Sports quota! But that doesn’t stop him or make him any less from being like a ‘Dabangg’ like supercop who even though isn’t the tallest man in the planet but is still strong enough to give the desi ‘dhobi pachar’ to the quintessential 6 feet muscular villain. He and his mentor, senior police officer aka Mr. Gill, played by the veteran Ronit Roy, dream of only one thing and this is a crime-free Firozpur.

In the process, Arjun meets a beautiful and gorgeous reporter named Ritu Randhawa (Kriti Sanon) from ‘Tezz news’. One should specifically compliment the ‘bijli se bhi tezz’ idea to call the channel ‘Tezz News’ and why not? After all, punchlines do matter and what is a film without any punchline from the leaf heroine? Arjun falls in love with Ritu and dreams of getting hitched with her but only after completing his dream and that is to free Firozpur from the evil clutches of criminals and gangsters.

So in order to eradicate and banish crime from Firozpur, Arjun and his close aide, sub-inspector Onida Singh, plan to create a rift between the crimelords themselves so that they eventually kill each other in the conquest for power and position. However, although morally it feels right as it is all about removing crime, it is legally incorrect and the ‘beauty with brain’ reporter Ritu smells something fishy in the whole scenario of gangsters getting killed one by one and eventually confronts Arjun on the same. Arjun too doesn’t get into any kind of fibbing and directly tells her that it is his way of working and he doesn’t give a damn as long as the state is being free from crime. This brings an ephemeral hiatus in their relationship and they both drift away from each other. However, there’s a twist in the whole tale which only unfolds in the climax and for that one has to see the film because of course, we aren’t here for spoilers, right?

IWMBuzz Verdict: The film is crisp and only about 2 hours long which is a good thing as it doesn’t give you a feel like it’s trying to overfeed you and make you laugh forcibly. Diljit and Kriti essay their roles well and that’s visually pleasing. Onida Singh aka Varun Sharma, as usual, was sailing in his ship of comedy and looked effortless. The film has its share of funny moments which is surely to make the audience laugh. However, the main limitation that the film has is one would say, average editing or rather over-editing. When you see the whole movie, you will get a feel like certain scenes were simply not needed and they made a mess by trying too hard. To make it worse was using too many graphical elements like the text in certain scenes where there was absolutely no need as the message was clear in itself. One must compliment Seema Pahwa for her performance and she seemed absolutely the right casting for the role of the corrupt female politician. Ronit Roy and Varun Sharma too perform well within their limitations as having good actors do help. However, the biggest drawback as mentioned earlier is certain absolutely unnecessary scenes and editing which totally ruins the whole scene. If you go in with a super sane mind who is looking forward to finding logic in every scene and shot, you will be disappointed. However, if the comedy and entertainment movie is your thing, you should definitely watch it. One would feel Dinesh Vijan disappointed a little. But then again, the expectations have become so high from Maddock Films that after ‘Stree’ and ‘Luka Chuppi’, everyone is expecting something of that level itself and nothing short of that, due to which even a good film from them makes one feel like just above average. To wrap up things, this one should make an impact and find its audience as time progresses and all Diljit and Kriti fans will surely love it. 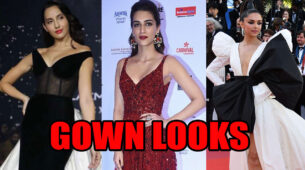