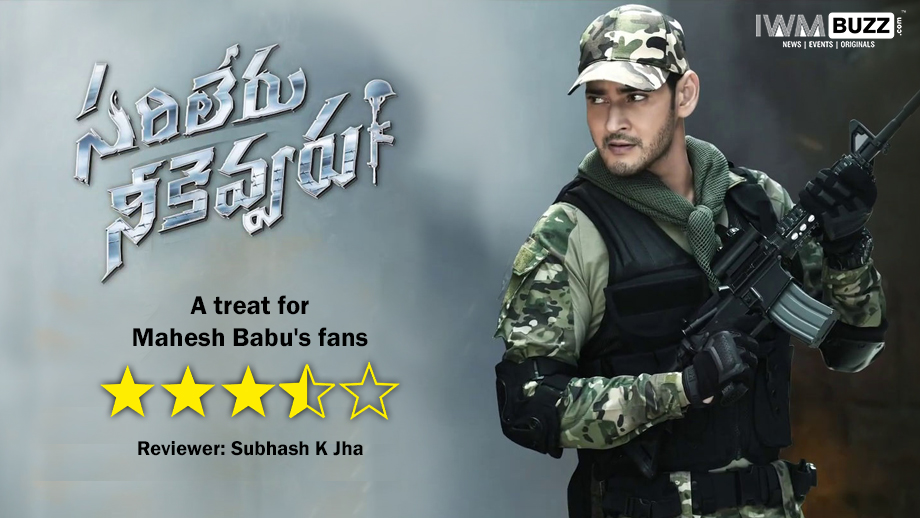 Mahesh Babu has always been the poster-boy for cinema with a relevant theme and contemporary topic. This is the first time I’ve seen him having so much fun with a role. In a film that takes him from the army base of Kashmir (where, in the preamble, we see him fool around with his sidekick/friend over a cup of coffee while a timebomb ticks away in a public square—cool, did someone say?), to the town of Kunoor, where the righteous professor Vijayshanthi (back on screen after a long hiatus, looking serene) is in need of serious help from our all-purpose hero.

In between Kashmir and Kunoor, there is a lengthy train journey which is an independent film of its own. It comprises the fidgety plot’s romantic leading lady Rashmika Mandanna and her family that is desperate to marry her off to any man who would have her. Mandanna, who really has no place in the plot, spends the entire film stalking and coochie-cooing with our armyman hero, who couldn’t be least bothered. He has far more important things to do than pay attention to a woman whose IQ is seriously underdeveloped.

There is an element of the outrageous in the way the romantic leading lady insinuates herself into the hero’s life over and over again, when clearly he, and the film’s screenplay, have no place for her. But then this is a Telugu film. Mahesh Babu, without a heroine to sing, dance romance and fool around with, is as unimaginable as Prakash Raj not bringing his comic timing into his slimy villainy.

Unmistakably, the plot belongs to Mahesh Babu, and then VijayShanthi and Prakash Raj. The rest are precocious perks, diversive bumps that come with the terrirory that Mahesh Babu lords over with such equipoise. His dancing with Rashmika at the end, and earlier with Tamannaah Bhatia, (in a guest appearance), is a rabblerousing delight.

Mahesh Babu’s confrontation sequences with Prakash Raj show more writing skills than some of the other episodes in this lengthy film that jumps audaciously from the comic to the action, sometimes within the same scene. In one specially inventive sequence, Prakash Raj brings on the mob to teach Mahesh Babu a lesson. As they move forward menacingly with blood in their eyes, Mahesh loudly announces that Samantha (Akkineni) is visiting in the next street.

The mob disperses magically. One wishes there were more such cleverly conceived interludes in the plot, which tends to wander into bylanes with deadends. But then we have Mahesh Babu. He is that decisive factor which makes the audience cast its vote in the film’s favour, no matter how scattered the flavour. Here he is more in the mood to please the masses than he has ever been. His pre-climax monologue on political corruption is bound to bring the house down, though you may be wondering how a cocky soldier reached parliament.

Sarileru Neekevvaru has plenty of patriotism and family sentiments. But most of all, it has the audacity to use its charismatic leading man’s presence in loops of high-flying heroics that salute the enduring star-power of an actor who never seems to age. No matter that the provocation or the cause for rage.