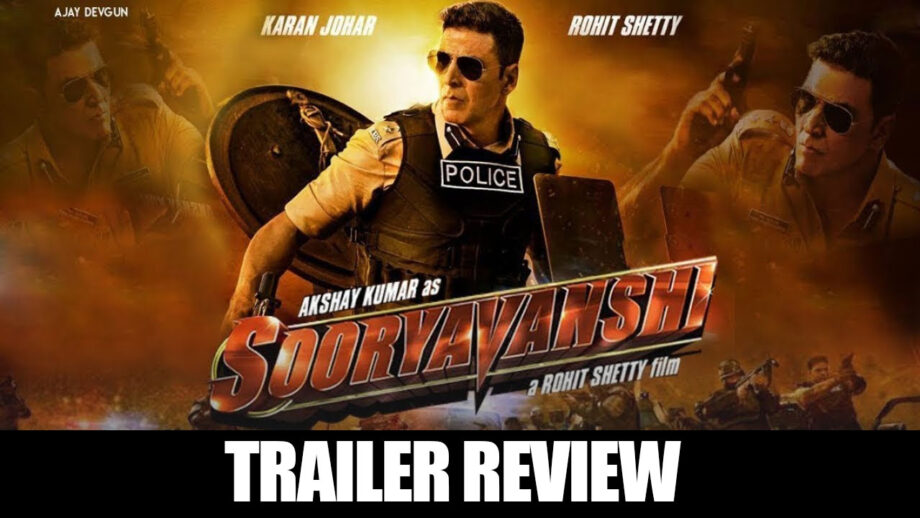 I am not too sure I feel comfortable with a massy (please note, I didn’t say messy)  moviemaker like Rohit Shetty using terrorism and terror attacks as a ploy to create on-screen thrills.  I mean, when you are making millions out of every blast, how genuine can your concern for the nation’s well-being be?

Having made the rather over-righteous point, I must say the trailer of Sooryavanshi is full paisa-vasool. For fans of Akshay Kumar, it is a complete orgasmic experience. The guy still super sprightly at 50, hangs out of choppers and hangs out with his family (wife Katrina Kaif trying hard to look like a wife of an adventurous cop) with equal ease. He also hangs around with terrorists played by some seasoned actors like Abhimanyu Singh,  Sikandar Kher and Jackie Shroff all trying hard not to overpower the moral balance of their scenes with the hero.

Akshay Kumar is quick with his guns and words. But Ranveer Singh is quicker. The best line in the trailer goes to ‘Simmba’ Ranveer Singh who sees Akshay’s Sooryavanshi squabbling with ‘Singham’ Ajay Devgan (yes he’s in the trailer too) and says, “You too have started. Kisska zyada bada hai (whose is bigger)…I mean, entry.”

The Freudian implication of the priceless line is probably lost on the cop-heroes who are too busy fighting terrorists and taking themselves seriously to pause and see they actually look like school kids comparing notes on their private parts.

Sooryavanshi looks like it is very much part of Rohit Shetty’s videogame universe of virtual machismo. Skidding cars, roaring helicopters, blazing guns and comic book heroes saving the world while making sure their underwears don’t slip off. This is the desi equivalent of the Marvel universe with enough adrenaline flowing through the narrative to satiate the most brawn-drawn crowds.

Now that we know Ajay Devgan and Ranveer Singh are making guest appearances in Sooryavanshi, can we expect director Rohit Shetty to also drop  in?