Sonam Kapoor is a very well known face in Bollywood. She has faced a lot of controversies.

The most controversial statements made by Sonam are:

Sonam called the Miss World Aishwarya Rai Bachchan as Aunty. The catfight began between them since then. On the chat show of Koffee with Karan, she stated that Bollywood has no fashion sense and “Everyone! They all suck!”

The next statement she made was “Ranbir Kapoor is a great friend and not a Boyfriend material”. She also mentioned that he is not sexy and he is mama’s boy.

Sonam showed her middle finger to the press during the promotion of her film Players.

Sonam also said that Indian men have no fashion sense. In an interview with a Fashion magazine, she said that “Indian men don’t understand fashion unless they are gay”.

On Koffee with Karan, she was asked about who she thought had plastic surgery? And she replied it by saying that “Honestly, lots of people in Bollywood. And they look scary!” 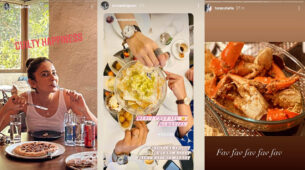