The year 1980 was crucial for Naseeruddin Shah. It was the year when two of his career’s most decisive films Saeed Mirza’s Albert Pinto Ko Gussa Kyon Aata Hai and Sai Paranjpye’s Sparsh were released within months of each other. While in Mirza’s film the indomitable Naseer played a very angry member of a minority community in Sparsh he again played an extremely marginalized character from another minority community. The community of the blind. Unlike Albert Pinto who was perpetually angry Anirudh Parmar in Sparsh loses his cool only when reminded of his physical specialness.

Back then, blindness was known as a handicap. And Anirudh steeped in a righteous pride won’t bear with the ‘h’ word. What makes Sai Paranjpye’s Sparsh such a special film about a specially-abled character is Anirudh’s stubborn refusal to be slotted as a victim. So dogged is Anirudh in circumventing sympathy and even empathy from those around him that he ends up practicing a reverse kind of disability-oriented isolation where the victim appears to want so desperately to appear ‘normal’ and so anxious to belong to the mainstream of society that he ends up making those around him feel acutely conscious of how to not allow the specially-abled person to feel disabled for even a second.

Anirudh’s predicament is never sentimentalized. He has a male assistant to help in the blind school where Aniruddh is the principal, and at home where the young assistant makes tea and does sundry chores unobtrusively for Anirudh.He, the blind man who cannot ‘see’ how difficult it is to initiate any emotional or verbal interaction with him, meets a grieving widow Kavita(Shabana Azmi) who has cut himself out of all normal activities.

Both Anirudh and Kavita are isolated by their individual predicament. Who is to say who is more isolated?Sparsh is about two fringe people tentatively reaching out to one another. Actually it’s Kavita who keeps pushing into Anirudh’s voluntary isolation, while he fears to lose his independence. When a blind colleague(Om Puri)’s wife dies leaving the colleague helpless Anirudh decides to call of his engagement with Kavita. She accepts the snub without complaint. But then he grows even more protective about his isolation, and asks Kavita to stop her association with the school for the blind where he is the principal because according to him she makes the blind people in the school uncomfortable with her normal-see.

Here’s where Kavita’s only friend(played by the feisty Sudha Chopra) intervenes and helps Anirudh ‘see’ the truth about his blindness towards Kavita’s feelings.

“Between the two of you I wonder who’s really blind. It’s not you who needs her. She needs you,” explains the friend.

Throughout the delicately threaded film we see Naseeruddin Shah not looking blind at all. The National award for best actor that he received for Sparsh was a meager reward for what is arguably the best portrayal of a blind person and his inner-world in the history of world cinema. And I include such universally-acknowledged portrayals of the sightless as Audrey Hepburn in Wait Until Dark, Rani Mukherjee in Black, Kimura Tatsuya in Love & Honor and Joren Seldeslachts in Blind.

Naseer surpasses all these timeless portrayals of the sightless. His performance is far superior to the film. Sai’s film seems to have suffered from a lack of budget. But it makes up for the rough edges with its unaccented message on humanism. Some of the scenes with the children at the blind school are truly heartwarming. At one point when Shabana Azmi buys a candle off a blind boy whose friend is shown to be teasing him about his unsold creation, the overwhelmed boy reciprocates her kindness by saying, ‘Didi, your saree is lovely.’

There is a quaint subplot about the rivalry between two boys at the blind school, one blind the other with normal vision, who fall out when Shabana Azmi seems to favour the blind boy. The one that can see begins to wish himself blind just so that he could be treated equal to the boy who can’t see.

Sometimes the guilt of being normal around those who are exceptionally abled , can be a very tough burden to bear. Shabana’s struggle is a common occurrence in the lives of those have to live with people with special physical or emotional disorders. The struggle to keep the specially-abled individual’s ego away from injury weighs so constantly on the normally-abled individual’s mind that the relationship gets strained beyond repair.

It’s the theme of ‘seeing’ beyond the optical vision that gives Sparsh that feeling of a film with infinite resonance.A lot of the material is roughly cut. One can see the struggle that went into putting together this brave film. But it holds together because of Naseer’s understated yet resounding performance. Not for a second does he appear blind.And that’s the highest form of acting being applied to Anurudh’s character.

*The Sparsh producer was filmmaker Basu Bhattacharya who for reasons best known to him, didn’t want to release the film. For 3 years it was in the cans. Finally Shabana Azmi and Sai Paranjpye undertook a vocal public protest against the creative smothering. That’s when the film was released.

* The film was actually shot in a blind school. And Naseruddin Shah’s character was based on the principal of the blind school.

* Om Puri who made a grand breakthrough with Aakrosh the same year that Sparsh was released, had a cameo part in Sparsh.

* The Sarod maestro Ustad Amjad Ali Khan, then only in his 20s, made a guest appearance playing at a public concert.

* The film’s music was done by Kanu Roy who scored music in a majority of Basu Bhattacharya’s own directorial ventures.

“Does anyone remember Sparsh?I am very proud of that performance. It came just before Aakrosh.In fact I went without a day’s break from Sparsh to Aakrosh. Two completely different worlds. After playing the blind man I had to guard against blinking my eyes on the sets of Aakrosh.I can’t think of too many blind characters in our films that have been done with finesse.The credit for making Anirudh credible goes to Sai Paranjpye.The scenes she created for him were so truthful.It was very easy for me to play Anirudh. What I had to get right was the blind man’s body language. And that was something I was working on even before Sparsh. The body language of blind people always fascinated me. I had two class mates in college who were blind. I used to observe them a lot . I needed to only understand why the blind behaved the way they did. The sheer excellence of the writing took care of the rest. Anirudh was a character with a great deal of pride and dignity.Usually the blind in our cinema are portrayed as these self-pitying characters. The person Mr Mittal on whom my character was based was the principal of the school we were shooting in. If you ever saw him you’ll see the most beautiful eyes on him. No one can tell he’s blind. The way he walks, lights a cigarette, conducts himself is like a completely normal sighted man. In fact Mr Mittal’s proud self-declaration was, ‘Why do you call me disabled? I am just differently abled.’ That was the first time I heard the term ‘differently abled’ and so many years ago!Mr Mittal felt he could do anything except drive a car. He hoped some there would be a car that the blind can drive.Also, my grandmom was blind. I used to watch her quite closely. I didn’t do anything special to prepare for the part except to familiarize myself with the surroundings in the blind school. As for looking so blind, it was finally just an acting trick.Did you feel that the trick didn’t show? That’s a compliment. I must say it was very kind of Sai Paranjpye to trust me with a central part at that early stage of my career. I believe Mr Sanjeev Kumar was the first choice for Sparsh. For some reason he chose not to play the part and it simply fell into my lap. I was thrilled because it was an author-backed role. Sai had a lot of faith in me. When I read the script I didn’t feel there was the need to change a single thing in the script.I think Sai recently did a play, but no movies in recent times.I rate Masoom and Sparsh as my best performances.Both these films co-starred Shabana Azmi who has always very supportive and a positive influence on my performances. No one writes roles for us any longer, though we did come together for a short film Rice Plate directed by Rohit Roy five years ago.”

“Sai Paranjpye has a delightfully observant eye as a writer. Her dialogue is quirky, comic, colloquial without losing out on depth. Sparsh is a beautifully written film about two social outcastes, one a physically challenged man and the other a widow who come together, bound by the most delicate bonds of love. The widow is a far cry from the standard long-suffering Hindi film widows both in the way she behaves and what she wears .And yet years of tradition and convention get in her way.
The relationship between Naseer and his assistant is so endearing.It was amazing to work with the blind children, disconcerting at first but then it dawns on you that the handicap is in our heads.They’ve come to terms with their condition and make the most of life. They play cricket in their own ingenious way.They would say ,” Didi, we saw your film” .I would be taken aback.But then I would see them sitting in front of the TV and “hear” the film with all the joie de vivre at their disposal.Sparsh was the first film that made a plea for story books in braille.Today it’s a reality. I didn’t particularly work on characterization.Just went along instinctively and obeyed Sai’s directions. It was fascinating to watch Naseer transform himself. He was so convincing as a blind man that off-camera I would subconsciously give him my hand when he was walking downstairs! I had predicted he would win the National award, and he did.Sparsh is special to me for personal reasons also. Javed Akhtar loved the film and I got re-introduced to him because of Sparsh. 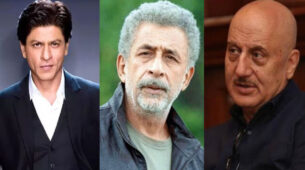