Former India captain Mahendra Singh Dhoni proved to be one of the finest Indian cricket team captains. He is always on the go whether it is on the field or off it. Mahendra Singh Dhoni is probably the only cricketer in the world, who, despite achieving tremendous glory for his country, is hated as much as he is admired by the Indian cricket fans. Ever since Dhoni made his debut in International cricket in 2004, the limited-overs skipper has endured a roller-coaster ride in the game. Here are a few controversies:

Exclusion of Senior Players: Ever since the time Dhoni took over as captain in 2007, many youngsters from the domestic circuit were given a chance to play for India. But this also meant that seniors had to be omitted from the squad.
Failure to win Overseas Tests as Captain: When Dhoni took over the Test captaincy from Anil Kumble in 2008, a lot was expected from the Indian skipper to emulate his limited-overs form. Initially, with a host of home series wins involving mighty Australia, New Zealand and other top teams it seemed India would be unbeatable in tests. However, the worst was yet to come. India failed to win any overseas series from 2011 onwards, having lost embarrassingly to Australia, England, South Africa and New Zealand on their turf.
Preference to CSK players: Another prominent aspect about Dhoni which raised eyebrows was his preference to give opportunities to cricketers from Chennai Super Kings. There has been criticism over the fact that the Indian captain has given more opportunities to players from the CSK squad, ahead of many other deserving cricketers in the country.
Statement about seniors: Dhoni said about the senior players Sachin Tendulkar, Virender Sehwag and Gautam Gambhir, “They are safe fielders but on the slower side, they can end up getting injured in big Australian grounds.” This comment landed MS Dhoni into the biggest controversy of his career.
Dhoni’s fading finishing ability: MS Dhoni is widely considered to be one of the greatest finishers of the game. His finishing style is the stuff of legends. However, there are times when Dhoni couldn’t finish the match, even though India was on the cusp of victory. Dhoni’s finishing ability has seen a steady decline in recent times.

No matter how many controversies surrounded him, he is immensely loved by people around the world. 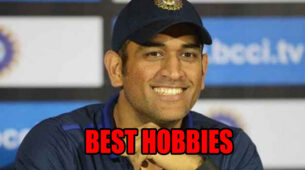 4 Mahendra Singh Dhoni Hobbies That Will Amaze You