Talented actor and creative mind Manish Raisinghan has won many accolades for his acting chops in TV show Sasural Simar Ka. Later, he won appreciation for his short films

Now, Manish has added another feather to his cap. He turned a singer and rapper for his latest music video Nikle Toh Nikal Logey. The video is entertaining and gives a social message.

Talking about the same: “Everyone around me knows that I can’t sit quietly and likes to explore stuff. I was working on something and my friend Anup, who is also a music director, called me and asked if I wanted a do a video. However, I replied to him that a lot of people have done it and hence I refused. However, he said that I being in the video would be something different and quirky. He found out ways and we built up a quirky song and video and that’s how it all started.”

He continued, “Later, I sent my video to Kunal Ganjawala for his opinion. He asked me why he is not part of the video. Soon, I was glad that he wanted to be part of the video. Our motive was entertainment but when he came onboard things got bigger. It was not just a rap video but the song has a deeper meaning too. In the whole song, it is a fight between the brain and the heart. At the end of the song also we have put a line which goes… ‘iss baar dil ki mat sunn na, warna desh haar jayega’.  We all have really worked hard on the video.”

When asked about his rap debut, he mentioned, “There were challenges as I am not a singer. I don’t understand the tempo hence I was never on the tempo. I had to re-record thrice to get the tempo right. It was quite a bit of a learning curve. But, it’s a team work, due credit is for everyone.”

Commenting on the social message, he added, “We all are sitting at home. I saw my nephew and niece suffering, they are young and they want to play and meet their friends. My parents have a social circle. We are hearing all depression news from all around the world and it is scary. All these things were hurting and the message came out well via the video. I am glad that a lot of people took this song as Corona Anthem.”

Furthermore, Manish is making the most of his time, “This is my most productive time. I hate traffic and I haven’t stepped out of my house since 15 March. My mom just got done with his chemotherapy hence she is sensitive, so we made sure to not step out of our house. The entire span has been involved in making productive things. I am also working on two more things which are commercial. I am also spending a lot of time with my family.”

“My final message to the fans is that ‘nikle toh nikal logey, so stay home and stay safe.” 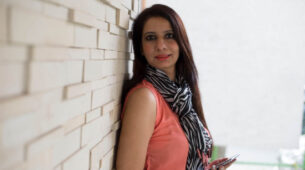