Actress Shriya Jha talks about what makes her show Nimki Mukhiya special to all in the cast and crew. Actress Shriya Jha who essays the role of Sweety in Star Bharat’s popular and top-rated show ‘Nimki Mukhiya’ (Qissago Telefilms) is high on energy and immensely motivated with words of appreciation coming from her show’s Producer and Writer, Zama Habib. Recently, the ace Producer praised her work on social media, and this has made the girl extremely happy!!

Says the girl who has earlier showcased powerful performances in shows Uttaran, Do Dil Bandhe Ek Dor Se, “This character of mine in Nimki Mukhiya is very soft, yet scared because of her family’s background of picking up their guns at the drop of a hat. Sweety is the one who tries to balance things out in the family. Also, if you have noticed, she is the one who is a calming factor in the family. With Nimki (Bhumika Gurung) coming in the house, Sweety is not downright rude, but she has always supported her mother. Hence, she has been against the wedding, but somewhere deep down, she is a soft gentle soul. This is the attribute that attracted me to the character.”

Talking on the words of praise got from her Producer, Shriya states, “Yes, Zama Sir summed it up very beautifully on Facebook when he said that it is tough when you don’t have too many lines, but have to emote through your expressions. I am not on Facebook, but Garima Mam showed it to me. I am happy and humbled. Speaking about it, everybody on our set is a fine actor, and we get to learn so much. I am surrounded by good actors and can say that I am constantly motivated to give my best. Also, the show is beautifully written.With an undercurrent of humour, what all Zama Sir has managed to convey. I am sure that not many writers will be able to do so. Our Directors also do such a great work.”

Shriya likes Sweety’s innocence and dignity a lot. “She is a person who will never get up and beat up anyone. Even after being brought up in that family, she is a sensitive, sensible and quiet soul. This strength in the character is what I find appealing.”

The show Nimki Mukhiya will always remain close to her heart. “My father is from Bihar and whenever my Dadi watches me in the show, she is very excited. She loved the Chhat Puja special that was shown in the show. So this will remain close to my heart as it connects me to my roots.”

Also, the fact that Shriya’s mother, the popular actor Amardeep Jha is a very big fan of the show Nimki Mukhiya gives her a warm feeling. “My mother will never miss even one episode of the show. She simply loves our show and genuinely enjoys it. Well, the biggest reason why she started seeing it was for me. But now she’s hooked on to the show. All my relatives from my mother’s side are Sikhs, and they love the show. Our show is so nicely made that once you start watching it, you are hooked to it.”

Keep up the good work, Shriya!! 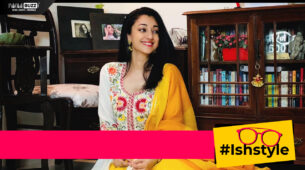