Yeh Rishta Kya Kehlata first aired in 2010 with Hina Khan and Karan Mehra aka Akshara-Naitik as the lead jodi. Since then the successful TV serial has gone major changes and gave the audience so many memorable moments. Romance, fights, high voltage drama, celebrations – the decade long television serial never had a dull moment.

Along with Diwali, another major festival that our Indian television shows love to celebrate on-screen is the festival of colors, Holi. Yeh Rishta Kya Kehlata Hai too had Holi being celebrated every year, first with Akshara & Naitik and now Kartik & Naira.

In all these years, we witnessed a lot of memorable moments on the festive occasion. Let’s recollect some of the best holi scenes; After things turned sour for Akshara and Naitik, they were reunited after being apart for so long. Both the families set aside their differences and came together to fix the couple’s relationship. What better occasion than Holi to start anew?! Amidst the celebrations, it was sweet to see the family members trying to get the couple closer to each other but all in vain.

But wait, finally bhang does the trick when Akshara-Naitik forget about their bitter fight and get together happily. Remember Akshara, Naitik and Naksh with cute little tattoos? Akshara sported a star tattoo on her neck with Naitik getting the similar one on his cheek. And baby Naksh had a bunny tattoo on his face. In fact, the whole Singhania pariwar celebrated Holi donning tattoos.

The 2015 Yeh Rishta Kya Kehlata Hai Holi episode had the coolest tattoo-themed Holi party on television with a heavy dose of drama. Naira and Kartik were surrounded by colors of love for their first Holi after marriage. The romantic sequence between the couple running around, chasing each other was beautiful to watch with bellowing curtains, mirrors and a soft love track playing in the background. At the end they collide, color each other and share a sweet hug! 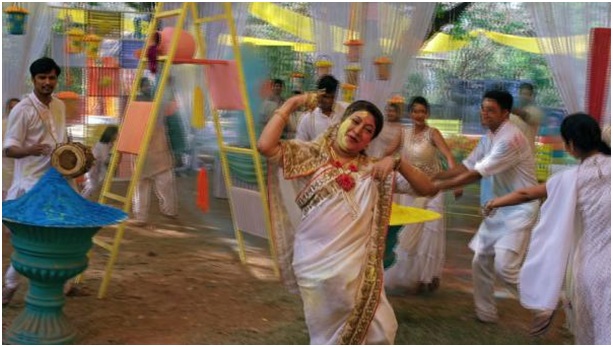 While the Holi episode was special for its romantic moments between Kartik-Naira, we cannot forget when Dadi broke into a Naagin dance surprising everyone. Rajshri too joins in the fun when Dadi challenges her.

Both the ladies being high on bhang and drunk dancing to Naagin was as hilarious as it was adorable!

What do you think will this year bring? Will we see Kartik & Naira finally getting married this Holi special? Fingers crossed!