In today’s episode of Khatron Ke Khiladi 10 episode of 5th July, we see the contestants race for the ticket to finale

Today’s episode of Khatron Ke Khiladi 10 (Colors) starts on a very dynamic note as Rohit Shetty gives the contestants good news that there won’t be any fear phunda included in this week. Rohit also introduces the Ticket to Finale and all contestants are pumped up with positivity.

After having some fun banter Rohit Shetty demonstrates the first stunt for Ticket to Finale. This is a truly dynamic stunt which includes a moving truck with contestants hanging upside down on a hanger colliding into walls of boxes. Dharmesh and Karan Patel compete in this stunt. Dharmesh goes in first and collects 6 flags and Karan collects 7 flags going in second, By winning this stunt Karan steps ahead in the race for Ticket To Finale. After the stunt, Rohit Shetty has some fun banter with Tejasswi Prakash.

All the contestants further move on to the next stunt location. After having some fun interaction with Karishma Tanna at this new location, the new stunt for the next race of Ticket to Finale is explained to the performers. The stunt is to be performed as a group of 2. Shivin Narang and Balraj Syal are partnered and Karishma and Tejasswi join hands. Balraj and Shivin go in first. Balraj and Shivin try their level best to untie the knots lying in the overflowing garbage pit. At last, they complete the stunt. Karishma and Tejasswi go in next for the stunt. They get off to a great start and complete the stunt faster then the previous duo, hence it’s the two ladies who go ahead in the race for Ticket to Finale.

So, the next stunt is performed by Karishma, Tejasswi and Karan, among whom one will make it to the final stunt for the ticket.

It was now time for another dynamic stunt, Karan Patel goes in first to perform and completes the stunt. Karishma goes in second but faces a lot of difficulties because of her height as she finds it difficult to maintain her body balance. But, somehow manages to complete the stunt. Finally, it was Tejasswi’s turn. She gets off to a great start. Tejasswi is the fastest to complete the stunt and reaches the Ticket to Finale stunt. With this, the written update of Khatron Ke Khiladi 10 episode of 5th July ends here.

It will be exciting to see who competes with Tejasswi in the Ticket to Finale stunt and wins a direct entry in the finale. 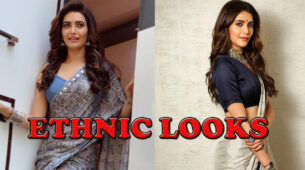