In Saath Nibhana Saathiya 2 Written Update Season 02 Episode 19 9th November 2020, we see that Kanak tells Kokila not to interfere in their family and pay attention on Gopi's misdeeds. The episode of Saath Nibhana Saathiya 2 starts with Gopi Kaka nursing Gehna’s wound and scolding her for risking her life. He asks Gehna to stay there while he will get a herbal paste from his gym. Anant knocks on the door and tells Gehna that the doctor gave medicine to apply on her wound. Gehna says she will do it on her own. Anant snatches the ointment from Gehna and applies it on her wound.

The family performs pooja. After the pooja, they get a call on the landline. Praful is shocked. He tells Anant that he got a job offer in New York, he says that he is happy for Anant.

Anant has to take the decision. Anant calls his placement agency and rejects the job saying personal reasons.

Praful and Jamna get emotional and hug Anant. Jamna is happy that Anant is staying with them.

Pankaj informs Anant that he received 1lakh rupees and thanks him. Pankaj says he doesn’t know how he will repay Anant. Anant replies that whenever he has enough money then Pankaj can repay him. Hema tells that she was thinking about Gopi as she came home late at night with wet hair.

Meanwhile, Kanak is trying to open a jar in the kitchen. Kokila arrives and says that with a fake nail she will not be able to open. Kanak asks Kokila to stop interfering in their family.

Kanak tells Kokila that she keeps lecturing others but, she should keep an eye on Gopi and Gopi is up to something.

Precap: Kokila asks Gopi who is Gehna’s Kaka for whom she comes in the outhouse to meet in a different disguise. 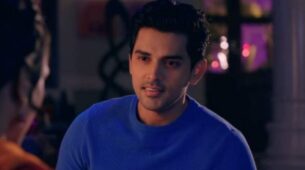