In today's episode of Yeh Rishtey Hai Pyaar Ke 22 May 2019 Naanu asks Abir about his feelings for Mishty but he refuses to divulge anything while Mishty seeks Naira’s advice on her dilemma. Today’s Yeh Rishtey Hai Pyaar Ke 22 May 2019 begins with the Rajvansh family and Maheshwari family celebrating and congratulating each other while Meenakshi fumes silently.

Rajshri is overwhelmed with happiness. Meenakshi then tells her that when the godhana ceremony happens, she has a huge surprise up her sleeve that will shock everyone.
When Abir starts walking away, Mishty stops him. He hands her a new pair of specs which Mishty finds sweet.
On the other hand, Kunal wants Mishty get rid of her glasses and hence takes an appointment with an eye specialist to have her checked.

Mishty is grateful to Abir for helping her with making a decision on the godhana ceremony. Abir asks Mishty if she is happy with everything to which she says yes.
Meenakshi informs her family about the ceremony. Later when Kunal questions Meenakshi about being unhappy about his decision regarding the ceremony, she assures him that she is happy for him.
Mishty and Naira talk. She tells Naira about her feelings and asks for her advice on the same.
When Abir enters his room, he finds it covered with Mishty’s painting and pictures. He is surprised. Naanu then comes in and tells him it was him who did it which again shocks Abir.
When Mishty talks about her feelings to Naira, she tells her all about love, then asks her if Mishty is ready to love Kunal. Upon hearing this, Mishty stills.

Naanu confronts Abir about his feelings but Abir refuses to divulge anything. Naanu resolves to get Abir to admit his love for Mishty.

Kuhu is upset about Kunal’s decision on arranging the ceremony. She starts crying about while Mishti watches her from a distance. 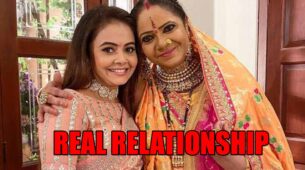