Top 10 plays of India, which are internationally acclaimed and can totally convince you to watch a play in today’s day and age. Theatre has long been a means of not just entertaining the crowd but also of educating the audience about diverse issues that plague the society. It is probably for this reason that theatre is not everyone’s first preference when they are thinking of what to do on a Sunday evening. The good thing is, recent years have seen a rise in the number of theatre goers.

If you’ve been skeptical about going to the theatre, here are the top ten classical plays of Indian theatre that will convince you to book tickets for a show right away. 1. Hey Ram Nathuram: Probably one of the most controversial plays, Hey Ram Nathuram has been written and directed by Sharad Ponkshe. It examines the life of Nathuram Godse as narrated by his brother. 2. Natasamrat: This adaption of a Shakespearean play revolves around a veteran theatre actor who, although doesn’t act anymore, cannot forget the memories of being an actor.

3. Jesus Christ Superstar: Alyque Padamsee’s version of this musical is a unique tribute to Christ’s life and uses rock music to talk about the importance of peace and love. 4. Dear Liar: This comedy drama is an Indian theatrical adaption of a Broadway play of the same name and had Naseeruddin Shah and wife Ratna Pathak Shah essaying the lead roles.

5. Ebong Indrajit: This Bengali play, written by Badal Sarkar, focuses on the loneliness that the Indian youth faced after the Independence. It captures the average Indian youth’s issues with identity, stability and creative freedom. 7. Tughlaq: Girish Karnad brings to the stage Tughlaq’s struggle of uniting Hindus and Muslims and succeeds in showing it is relevant even today.

8. Yayati: Another Karnad masterpiece, the play is based on the ancestor of the Pandavas, Yayati – who was cursed because of his infidelity.

10. To Mee Navhech: Written by Acharya Atre in the 1960s, the play is based on the course case of Madhav Kazi, a criminal. All You Need To Know About Manipuri Classical Indian Musical Theatre! 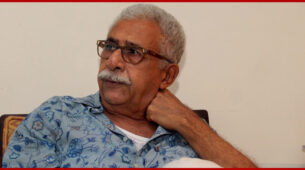