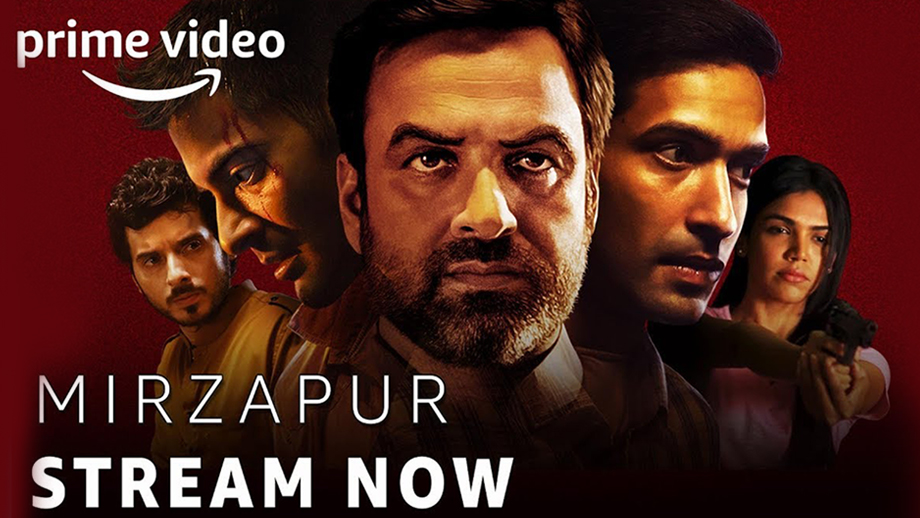 With the supposed agreement between OTT biggies (Netflix and Amazon) and the Government over self- censorship, will Amazon Prime’s latest Original, the east UP badlands saga, Mirzapur, be the last one to spew abuse and sex?

To be honest, there is no over-nudity as in Sacred Games till episode 3, but yes, there’s lots of lovemaking scenes and open talks of sexual incompetence. Here too, there is graphic violence (body parts being cut) and cuss words galore. Again, the justification given will be – how else do you expect goons to talk? My humble 2 pence — why don’t you make a show on a theme that doesn’t need the above? Sadly, most desi web content has not yet come out of the need to take advantage of the lack of censorship and use sex to attract eyeballs. Maybe, it becomes too much, forcing the Government to talk to OTT players (above agreement and come to a middle ground).  Historically, self-censorship has never worked. Hope the tide turns here, for, facing political and social heat, future Governments might regard stepping in, spoiling this newfound creative freedom that our filmmakers have fought for decades.

Anyways, enough of sex; now to the proper review:

The story of the 9-episode series is nothing original. We have seen several other films and TV series, which talk about Bahubali (strong men) and their struggles to stay on top.

Pankaj Tripathi is perfect as the uncrowned king of Mirzapur, Kaleen Bhaiya, a.k.a Akhandanand Tripathi. He has given a very restrained performance, never going over the top. He has no qualms about using violence to enforce his writ, exemplified in the scene where he forces a client to use defective desi guns or get the entire families of attempted assassins hanged.

Interestingly, he never misbehaves with women, yet forcibly gets married to a much younger woman, Beena (Rasika Duggal), who he can’t satisfy sexually to the extent that she asks him why he can’t use Viagra.

Kaleen Bhai’s heir is druggie and power-crazed youth, Munna (Divyendu Sharma). As it happens, he is not mature enough and ends up using the whip too often. His college principal pointedly tells him- be like politicians and use goons to get the dirty work done. Munna is quite vicious in bed as well. This Excel Entertainment production clearly shows that Divyendu is a talented actor, capable of enacting diverse roles, for example, Pyar Ka Punchnama, Toilet: Ek Prem Katha and Batti Gul Meter Chalu.

In an attempt to silence a lawyer over a public killing, he comes across two youths who have the gumption to stand up to him despite knowing who his father is.

Ali Fazal as the dense bodybuilder, Guddu Pandit, and Vikrant Massey as the smart Bablu, then have the Hobson’s choice – to enter or not to enter the world of crime. Guddu, on his part, always loved the fast life, while Bablu is scared, knowing that there is no exit.

Shriya Pilgaonkar is the feisty Sweety Gupta, who digs Guddu and spurns Munna’s love offer. She is the daughter of the local police officer, who would be happiest if Sweety became the daughter-in-law of the Tripathi clan.

Her younger sister, Golu, aka Shweta Tripathi, comes across as a normal girl who masturbates in the college library while reading erotica books. There will be a thing between Bablu and her.

Unable to be satisfied by her husband, Beena beds her stepson and really enjoys the process. First, she would send the house help to entertain him at night.

Kaleen and his father (Kulbhushan Kharbanda) had become kings of Mirzapur by eliminating the previous don. Both sides broke the unwritten mafia law of not targeting women folk.

But when it came to sharing the spoils of power, Kaleen’s dad ignored one of his trusted right-hand men, Rati Shankar Shukla, who revolted, putting senior Tripathi in a wheelchair for life. All day, he watches snakes and lizards’ shows on TV.

As a matter of loyalty for his past deeds, Kaleen did not kill Rati Shankar, but banished him to a nearby fiefdom, with a wound on his chest. This big-heartedness comes back to haunt Kaleen, a point that his father points out, when Rati Shankar keeps targeting the Tripathis.

As it happens with all gangsters, the real power always lies in the hands of politicians, who clearly tell Kaleen that if he does not fork out enough donations, they will simply switch sides to his above rival.

One scene that was disturbing but true was that women of the house are shown restricted to just household work or sex. Beena serves food or massages her father-in-law’s legs; this is reflective of the gender power game that is more entrenched in small town India.

Harshita Gaur, who was battling depression, has a small but cute role as the sister of Guddu and Bablu. Also, small-town girls (Sweet and Golu) only wear shorts at home; in public, they have to be dressed in salwar kameez.

We have only seen half the show so far (tough to watch all in just one day), but I am sure that as the episodes go further, the story will only heat up, with cop, Mayur Sahab (Amit Sial) going after the Tripathis with gusto. Also interesting to watch will be how love will force the Pandit bothers to revolt against their all-powerful benefactor.

IWMBuzz.com credits 3 out of 5 stars.