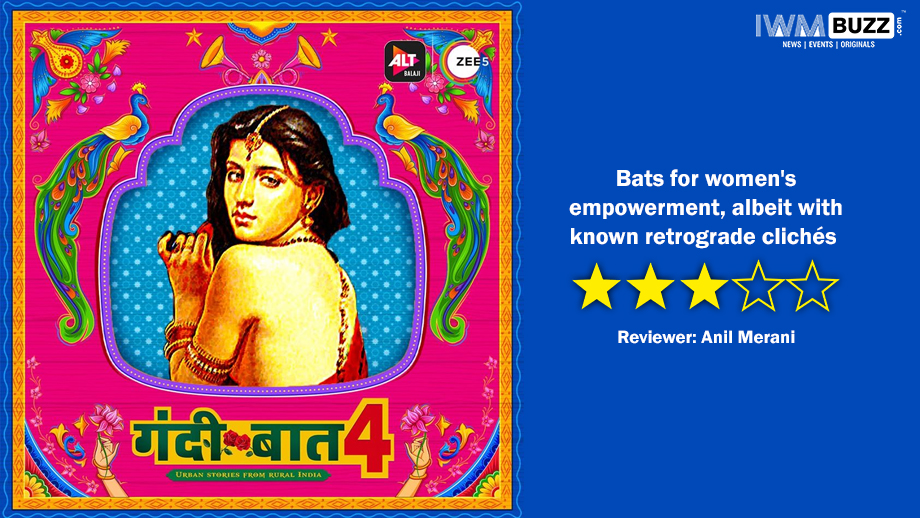 The biggest challenge in any erotica series is to keep finding new stories to push the background around the action. In this department, Sachin Mohite’s cult franchise Gandii Baat 4 ticks all the boxes, for they have chosen different narratives. The underlying theme mostly is smartly kept as women’s empowerment. What we also like is that the makers unabashedly show that women too want pleasure.

Using Bollywood songs as episodic titles raises the curiosity level for sure.

The first story of Season 4 is based on a true incident, focusing on a man who willingly gets another man into his marriage as his wife could never forget her former lover. The twist here was that the woman does not want to let go of her husband too. The latter points out that if a man can live with 2 wives, why not extend the same courtesy to the fairer sex? Food for thought, guys Polyandry, anyone?

The husband sleeps with his wife wearing the boyfriend’s mask, adding to the quirks. And the cable operator boyfriend puts a camera in their bedroom. Remember Sex Lies and Video Tape? The revolver scene clearly indicates the social rebuke you face for crossing red lines.

The boyfriend meanwhile has found another girl who finally relents to his sexual demands, but then he can’t go ahead as he keeps picturing his former love. The dialogue between the cable operator, mother and her house help was quite funny. Just one last thing on the first story, can we have a three-way religious marriage?

The second story focuses on men turning into women. We watched 3/5th of the episode.

There is an MP village which is under the curse that if men don’t act like women for 7 days every month, they will turn into women.

One infidel village groom who does not want to take his wife home decided to stay at his in-laws during the period to have fun. He also tries to force himself on his sister in law .

The ending is interesting, why don’t you watch for yourself.

The underlying theme of how women face sexual torture on a daily basis was brought out effectively. Hats off, Yash Choudhary, for wearing lingerie. It is not easy being a man to do such scenes.

Here I feel that forgiveness is not the way forward. Rather, punishment should be meted out (again, watch ending).

Last but not the least, we have a young girl who becomes confident of her sexuality. At first she was very scared of sex. The scene where she asks her history teacher about pain during lovemaking was funny.

Her marriage is on the rocks for refusing to sleep with her husband, who is more anxious to boast to his friends of his escapades. Her repartee with her mom showed defiance, which is needed in society. Again, watch as to what makes her walk out on her marriage.

Our question as to why she said yes to her new boyfriend was left unanswered in all the Spiderman action, though it was good to see makers promoting safe sex with the condom scene.

While I like the sexual empowerment of women bit, the treatment is a bit crude. What was really galling was that in an attempt to get the eyeballs, a lot of old sexual myths like size matters are pedalled. Agreed, people do talk about body parts (ghoda) and sex in a derogatory manner, but then, could the makers not have dispelled such notions?

Having said that, the level of nudity and lovemaking was tempered in season 4. Is it an attempt to fend off censorship? Will this turn off viewers in the hinterland who pay only to be aroused.

As for acting, none of the fresher leads except Mridula Mahajan, aka Kusum of the last story, did anything great. In fact, some of them did have a chance to raise the bar, but alas, maybe the fear of sex scenes took away their attention.

We also hope that with the series becoming a hit, Alt Balaji will now raise the budget, which is quite shoe-string, as can be seen in the screenplay.

A higher budget could also mean getting in more known actors, which in turn will raise the quality. Today’s lead girls are no longer coy to strip on screen or make out, if the story has meat. This has somewhat started, with well-known TV actor Garima Jain being a part of third story, Mera Pyaar Paan Nahi Jisse Tum Chuna Laga Sako.

As Gandii Baat is all about pushing the envelope, maybe next season could explore three-way lovemaking as well?