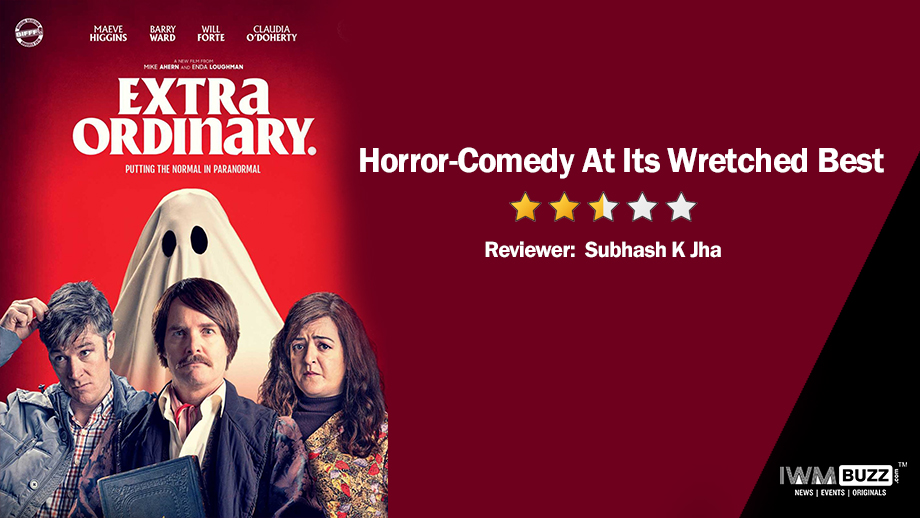 If you like that kind of thing, then this is the thing for you. The horror-comedy genre puts me off. I can’t fathom how scares can be funny, and really, how funny can scares be unless you are straddling two completely contradictory continents of the comic and the creepy hoping to strike paydirt somehow, anyhow.

Extra Ordinary a quirky Irish comedy, is a big hit on the streaming platform. It is inventive in its writing and obnoxious in subverting horror tropes including satanic sacrifices, to a satirical crescendo, and getting away with it. It’s also not afraid to let its protagonists look supremely silly. The heroine Rose (the brilliant Maeve Higgins) is no hour-glass figured siren slithering seductively on screen. She is just an ordinary driving instructor with some serious spook problems at home.

Rose is shown as a bit of a bumbler and there lies her and the film’s reasonable charm. Her scenes as a driving instructor are killingly comic in a nervous kind of way.

Rose and Martin and Martin have a blast with the spirits. But the real fun is yet to come. Enter Will Forte as a washed-out rock ‘n’ roll singer, a one-hit-wonder, who wants to revive his career by sacrificing a virgin. He is a hoot. Forte is so funny that I forgave this fearsome farce its excesses of self-indulgence including suspended bodies floating in the air, unapologetic tacky CGs, and plot twists that seem invented while shooting.

It’s all fun if you are not in a discerning frame of mind. But if you are looking for a really scary exorcism tale then this is not where you should be.