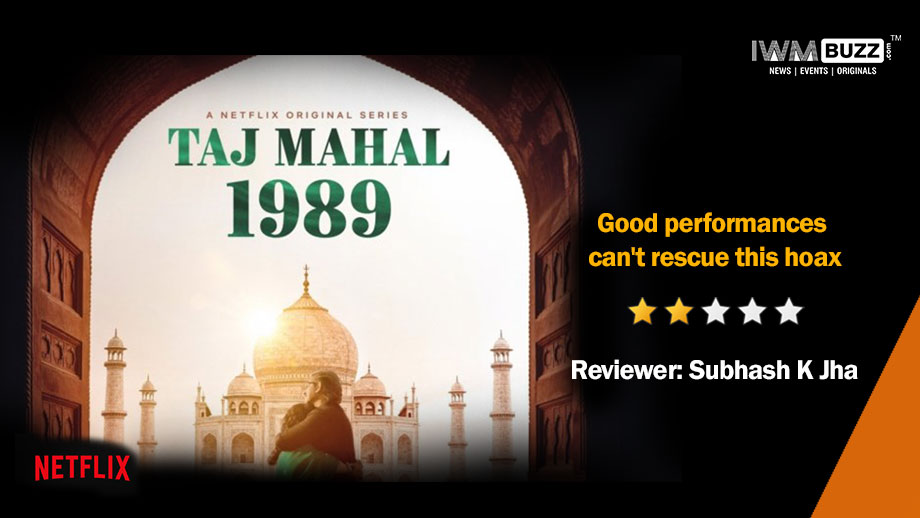 As a 40-plus couple trapped in a stagnant marriage, the redoubtable Geetanjali Kulkarni and Neeraj Kabi are effective performers trapped in a pretentious, retro-sociopolitical drama where every character speaks as though reading from a teleprompter.

Oh, I forgot! There were no teleprompters in 1989 (especially not in Lucknow where tehzeeb demanded love confessions in hand-written letters). But then, there was no Tinder either. And yet the inhouse rebel-lover Angad (Anud Singh Dhaka, effective) turns to the camera and tells us, “This is the time of face-to-face courtship, no Tinder, make do with whatever you get.”

So wait. If this is 1989 why is this enterprising spirit talking of Tinder? On what level of artistic expression does this standard of pseudo-intellectualism make sense? Characters routinely turn to the camera to talk to us, thereby creating an annoying distraction, something like Brecht meets Balajee.

The amalgamation of nostalgia and socio-political relevance is so self-conscious. I felt embarrassed for the wonderful actors, all struggling to remain relevant and unselfconscious in a climate of gathering indiscretions. Till the end when the intellectual poseur Akhtar Baig (Neeraj Kabi) takes his disgruntled wife Sarita (Geetanjali Kulkarni) on a much-delayed honeymoon to Agra, I was trying to decode the significance of the series, beyond its rather anaemic attempts to recreate Lucknow in 1989 with nothing more than the most basic tools of periodicity.

Making it worse is the abject absence of any cohesion in the storytelling. Plodding through this lumbering homage to a Lucknow that’s no more, we meet another couple, Sudhakar (Danish Hussain) and Mumtaz (Sheeba Chadha) both played by very fine actors, saddled with dialogues that could be WhatsApp forwards shared between two middle-aged movie buffs who have watched V Shantaram’s Pinjra too many times, if only the digital era existed back then.

The series also cuts intermittently to campus politics in Lucknow where Angad and his roommate Dharam (Paras Priyadarshan) lock horns on ideological grounds. Dharam gets a gun and loses his girl. A rich Sardarjee student pretends to be a Communist to impress the girl Mamata he loves. Mamata has the hots for Angad who drawls, ‘Aap mere saath flirt kar rahin hain?’ All the students behave like junior artistes from Mani Ratnam’s Yuva uncertain of their roles.

There is plenty of raunchy courtships thrown in to show us how “cool” the Lucknow students were even before the cool school was invented. Sex, ahem, is discussed over chai and cutlets in the canteen and Shakespeare is mauled in stage rehearsals where an anglicized bloke is mercilessly satirized because ….well, speaking English in just not cool in the simmering but bland cauldron of sex, politics, friendship, marriage and compatibility that writer-director Pushpendra Nath Misra has slapped together with the self-confidence of a conjuring artiste who knows the rabbit won’t desert the hat.

Whenever the camera loses interest in the characters it focuses on inaminate objects like a cake or a water-heating rod.

Why Lucknow in 1989, you ask? Why this series in the first place?