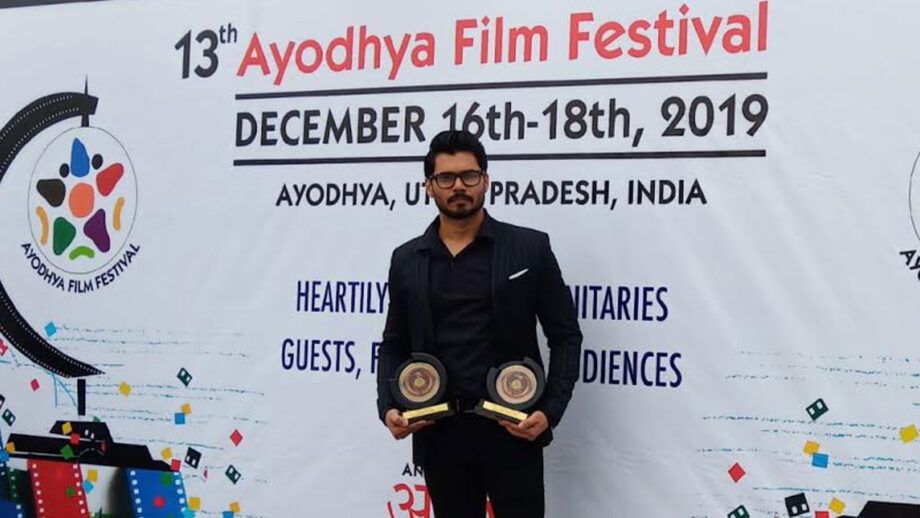 Actor Avinash Dwivedi, Bollywood actor and immensely talented dancer has won Best Actor award for his first Bengali film Rickshawala, directed by Ram Kamal Mukherjee, in Ayodhya International Film Festival in Lucknow today. “Rickshawala is very close to my heart not only because I have won the award but it is one of the finest projects which portrays the dying culture of Kolkata, City Of Joy. I have played the role of a rickshaw puller and got to know closely about their life and day to day struggle to keep alive the traditional vehicle of Kolkata. And I am so blessed to be a part of this project and I am really thankful to my director Ram Kamal Mukherjee for choosing me to play this character” says elated Avinash. He has got Screen Best Actor Award for his Bhojpuri cinema “Nachaniya” and Rickshawala is his first Bengali project.

Director Ram Kamal Mukherjee says, ” Avinash is one of the finest human beings who has not only trusted my vision but gave his blood and sweat for the character. I am happy to introduce him as an actor in mainstream Indian cinema. I think he truly deserves all the awards and accolades for Rickshawala.” Ram Kamal Mukherjee has directed his first film Cakewalk with Esha Deol Takthani, then his second film Seasons Greetings: A Tribute To Rituparno Ghosh with Celina Jaitly and Lillette Dubey. This is his fourth film. Being a Kolkata boy Ram Kamal Mukherjee he has seen closely the rickshaw pullers and their lives. “I used to wonder how these people who are thin and carries people and pulled the rickshaw in the busy streets of Kolkata and the by-lanes. Later I watched Do Bigha Zameen and City Of Joy I was blown away how the directors have portrayed their character. It is a small tribute from my side to this dying culture of Kolkata”.

Producer Aritra Das says, ” This Film always remain special for me as a Producer bcoz this is my first project in my Mother Language. Secondly bcoz I met u true actor  Avinash who played the title role in our film. In my small carrier span as a producer, I never come across an actor like Avinash who was so dedicated towards his character and worked with us as a team member without giving any tantrums or starry attitude. He worked under the Sun and rain for almost a week without any basic facilities which any actor would ask for. Today when he won the Best Actor awards 13th Ayodhya International film festival I feel happy that his hard work is getting recognized.

I am also happy for our Director Ram Kamal Mukherjee who won the best director award for Rickshawala.

This journey wouldn’t have been possible without my co-producer Gaurav Daga who went out of his way to make sure that face no issues in making this film. ”

Gaurav Daga also excited and thrilled about the recognition which Rickshawala got. He says,” I am extremely happy and delighted to know that Rickshawala won not only one but two awards at this prestigious Ayodhya International Film Festival. Avinash Dwivedi is one of the finest actors and human being I have ever met and the way he has supported us throughout its just beyond imagination. I am truly blessed to be a part of this project and I always have faith in Ram Kamal Mukherjee who is the captain of the ship, as I have seen him how he has worked on this project and how he made his actors comfortable on set”.

Rickshawala a story about a dying culture of Kolkata and also a tribute to Bimoa Roy’s Do Bigha Zameen and Roland Joffe’s City Of Joy.

Brad Pitt is considered the Prince Charming of Hollywood: We tell you WHY