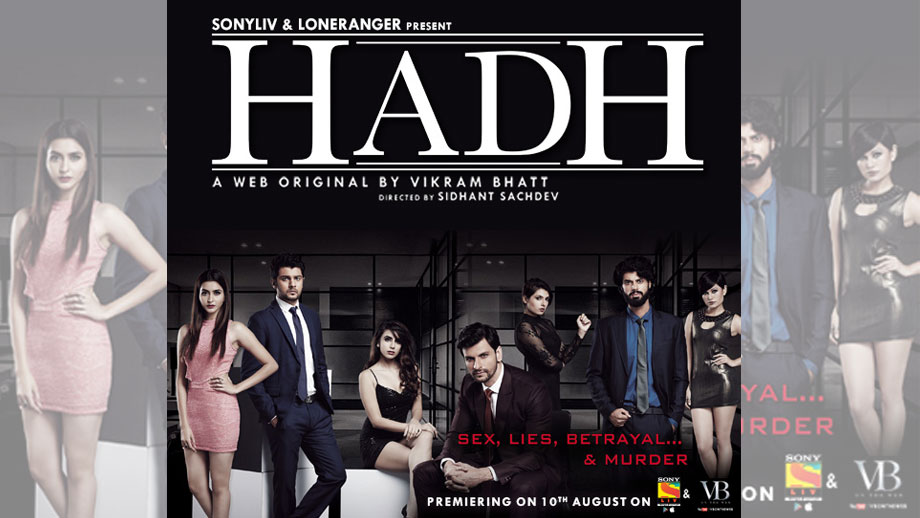 Running a vast business empire is no easy feat especially when it’s time to choose an heir for the same. A situation might turn up where three young, talented, and ambitious men are made to vie against each other in a ruthless game of becoming the successor to that empire. Wonder what happens next? Find out as acclaimed storyteller and director Vikram Bhatt’s web series Hadh premieres on SonyLIV, the complete digital entertainment platform with content for audiences across genres. Hadh is a gripping boardroom drama featuring revenge, feuds, lies, betrayal, murder, and passion produced by Vikram Bhatt’s Loneranger Productions, in association with SonyLIV. The 10-episode web series made its debut on the platform on (10th August), there by augmenting SonyLIV’s massive original entertainment content catalogue further.

An intense drama starring Vidur Anand, Trishaan Singh Mainin, Pranav Sachdev, Meisha Sakshi Iyer, Tithi Raaj, Simran Kaur Suri, Shreeradhe Khanduja and Ishika Taneja, the story revolves around Amit, Arjun, Karan, and Veer. A top businessman in Mumbai with a 25-year-old company he’s built from scratch, Amit is diagnosed with leukemia and wants to hand over the reins of his company. His only problem? There are three strong contenders – Arjun, his only son, well-educated and talented but too fond of enjoying life; Karan, Amit’s lovechild, an intelligent and hardworking individual who wants justice for his mother; and Veer, Amit’s protégé, who has been deeply involved in growing the business. To identify the true heir, Amit plans a game and sets some rules, which forms the crux of the story.  Who will win, and at what cost? Master storyteller Vikram Bhatt’s epic story of human complexities awaits you with answers.

Hadh corresponds to SonyLIV’s vision of bringing a transformation in the Indian online entertainment sphere by featuring edgy, relatable and high-quality content that resonates among the modern Indian audiences. With the central protagonists all representing the modern, urban youth with a colossal desire for success, the discerning Indian audience will surely find its points of relatability with the narrative, which is what SonyLIV strives to achieve in all of its offerings.

A master auteur, producer, and screenwriter, Vikram Bhatt has reigned the Bollywood film industry for over 25 years through repeated box office hits with cult movies like Ghulam, Raaz, 1920 and Awara Paagal Deewana. He introduced the concept of stereoscopic 3D in India in 2011 with one of his movies, Haunted – 3D, which also set the record for the highest grossing Hindi horror film of all time. He has also been involved in writing the script for movies such as 1920: Evil Returns, and the Hate Story series. Through VB on The Web, he has introduced himself for the very first time on the digital domain, which so far has about 400k subscribers and counting.

Link to the first episode: http://bit.ly/2uK4UVi

“‘Hadh’ targets the young, urban, and modern society that believes in achieving their goals at any cost.  Vikram’s web shows have been known for their fresh, dynamic perspective that today’s generation can instantly relate to. It is this relativity factor, and Hadh’s gripping plot, that prompted us to exclusively launch this brand-new web series. Our users also have the option to avail the subscription service in case they want to binge watch all episodes.

Hadh, is the 6th web original to come on VB On The Web on YouTube after its successes like Maaya and Twisted. With the love and appreciation, we are getting and with the exponential growth of digital content we hope to continue churning out great original content. This project, more than anything else, is close to us, because it marks our association with SonyLIV.