Sonam Kapoor is a true fashionista who is famous for her fantastic fashion styles. She is also known as one of India’s most fashionable celebrities. Sonam has become the highest-grossing actress in the industry. She has established herself as a fashion icon, and her fashion styles are loved by millions of people. Several people follow her for her amazing outfits, and her outfits are perfect for stealing.

She has a fabulous personality, which helps her to flaunt her sexy outfit and look beautiful. The actress is mainly identified for her novel designer outfits. She is the one who started to wear unique designer outfits, and her outfits are in trend, and several people are seen following her style. She always impresses us with her fabulous outfits. Her outfits go perfect for any occasion and make us look pretty and beautiful and slay the outfit. Sonam Kapoor also has her own brand with her sister named Rheson.

Sonam Kapoor always prefers to wear Anamika Khanna’s designer outfits. She is the reason behind Sonam Kapoor’s alluring outfits, and her creations are just mind-blowing. The actress looks perfect, and we just can’t stop staring at her. Whether it is traditional or western, she is seen wearing all types of outfits. She never fails to amaze her fans with her fashion style. The actress looks gorgeous and is a fantastic actress. When we talk about fashion, there is only one name at the top list, and that is Sonam Kapoor.

Check out some fashion styles of Sonam Kapoor and stay tuned to IWMBuzz.com.

Also Read: WOW: Did Sonam Kapoor REALLY have a crush on singer Shaan? Know the Truth 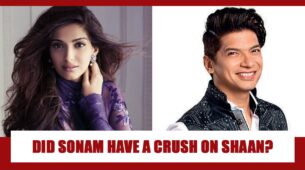