Both Varun Dhawan and Kiara Advani came together for the first time on the big screen for their mentor and ‘guru’ Karan Johar’s mega-production ‘Kalank’ last year. Although Kalank which had a huge ensemble cast in the form of Sanjay Dutt, Madhuri Dixit Nene, Varun Dhawan, Alia Bhatt, Sonakshi Sinha, and Aditya Roy Kapur failed to make an impact at the box office, the song ‘First Class’ featuring Varun Dhawan and Kiara Advani and sung by Arijit Singh became a rage amongst the fans. It was a sight to see when Varun was dancing on the 1st-floor balcony of Mumbai’s famous Gaity Galaxy theatre to promote the song on the day of the launch. Although First-Class song has been Varun and Kiara’s only work on-screen together, the duo has spent a considerable amount of time together sweating it out in the rehearsals. Going by Kiara Advani’s latest post, we feel she’s missing those dance rehearsal sessions with Varun to a great extent. Check out the video now –

Also Read: IN VIDEO: When Kiara Advani reacted SHOCKINGLY when a college student called her ‘Didi’ 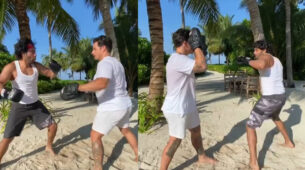