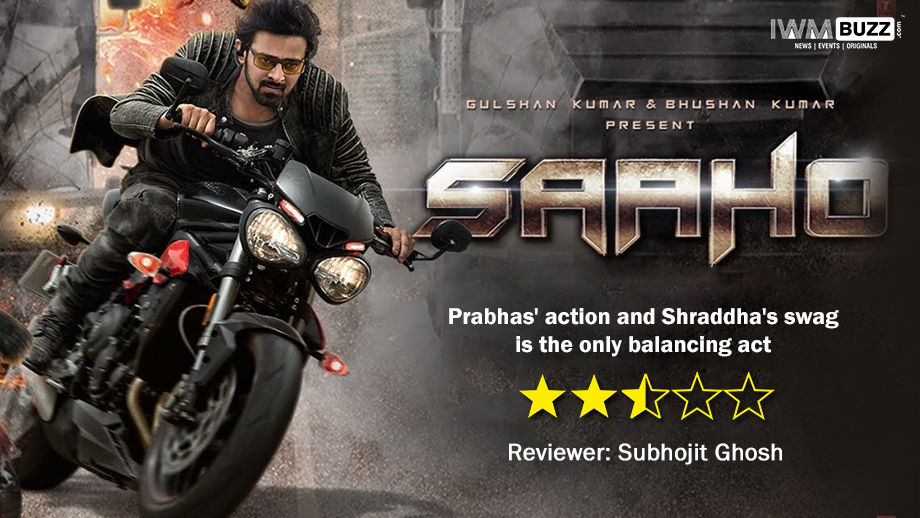 Prabhas is not just another name in the Indian film industry. He is undoubtedly a phenomenon in himself. When he burst onto the scene with ‘Baahubali’, not a single person thought that just one film of this man would end up becoming the highest grosser ever in the history of Indian cinema, beating even movies of Salman Khan. But Amarendra Baahubali managed to topple all. So it’s quite natural that the expectations are going to be huge once again as this man comes up with ‘Saaho’. But the important question that lies is – ‘will the movie stand up to its expectations?’ Let’s find out.

Saaho comes off as a high octane action thriller and it does deliver justice to the way it has been described. The story is based on a futuristic city of Waaji, which is the abode of heaven for several fugitives around the world. As one would expect, because apparently, there can only be one tiger in the jungle, there’s an immense battle of power and supremacy between the dreaded gangster groups and the primary tussle is because of the 2 lakh crores rupees that’s at stake for all, including Prabhas, aka Ashok Chakravarthy, and Shraddha Kapoor, aka Amritha Nair, who works as a fellow police officer in his team himself.

Prabhas’ entry will surely make you go into wonders. The badass, swashbuckling, don’t care about anybody attitude, expensive cars to add to the grandeur, swinging a bottle of Old Monk and directly taking on goons in action sequences featuring ostriches and black panthers, well, that’s the Prabhas swag for you. Amidst all the action and fight to win, the undercover cop Ashok also somehow manages a bit of juvenile romance time with his very own team member, Amritha.

Throughout the narrative, it is mostly about action, action and action. As if, ‘Filmein sirf teen cheezo ki wajah se chalti hain – action, action and action’. That’s where director Sujeeth gets it all wrong. Just because its Prabhas with a big ‘Baahubali’ like image, doesn’t mean people only want to see him fight and fight in a 170+ mins long stretched film. Although the narrative was pretty clear, there have been twists and turns in the story which looked a bit like purposely fed. The fight and battle of supremacy was the exciting factor in the film with Prabhas leading the way for action, but a lot of potential has been wasted without any doubt. Shraddha Kapoor does well as she tries to break away from her Barbie, girl next door image and decides to step into the world of action with guns and weapons around. She does strong justice to her character and the effort definitely shows.

However, the best part of the film without any doubt was none other than Chunkey Pandey, who plays the role of the main villain Devraj. Throughout the film, he has maintained consistency with respect to performance and beautifully ensured that nothing looks caricaturish. The climax is highly engaging and makes up a lot for the average yet dull first half.

IWMBuzz Verdict : The story, when intermingled with this kind of a star cast, naturally has ample potential to capture the market. However, seems like the balancing equation between the budget and the grandeur and narrative hasn’t gone down perfectly for director Sujeeth. After all, for a huge film of 350 crores with multilingual attributes, its extremely necessary for it to make the right kind of noise. Yes, the action sequences are well choreographed by acclaimed stunt directors Peng Zhang and Kenny Bates, but one needs to understand that just a balance of romance and action with a huge star cast can’t be the sole saviour of a film. It needs a well-researched and implemented narrative and that’s where Saaho falls short slightly. The movie definitely has its moments of fun, enjoyment and romance which will keep you intrigued, but it’s the unnecessary use of haywire action and people flying here and there almost every moment that makes a little clutter of confusion. But hats off to Prabhas and Shraddha Kapoor for the way they have pulled off this one. Although the chemistry between the two didn’t sizzle as much as we would have liked it to, it’s the performance, and more importantly, the impact they are able to make in the film with their performance is what will help the cause of ‘Saaho’ for sure. Credit to director Sujeeth too for attempting a big film of this type in his first Bollywood project. Over all, you will love it if you are into action and fighting and if you are fans of Prabhas and Shraddha. A small warning however : DON’T expect the magic of Baahubali lingering everywhere once again, as you will surely be disappointed that way. Watch with a fresh mind and it might just be a hunky dory 3 hours of entertainment for you.