Shobha De does a big mistake on social media This isn’t the first time that she has goofed up with the identity of a film personality. Shobha De , superstar-socialite and author, much favoured by certain media houses has done the inexcusable again.

She has posted the wrong picture in condoling the death of an actor. This time the victim of her penmanship is the Kannada actor Chiranjeevi Sarja who passed away suddenly on June 7. Quick to condole (why? What is the need to condole the death of a person when you don’t even know what he looks like?) Ms De posted a picture of the Telugu legend Chiranjeevi little realizing in her blissful ignorance what a blasphemous blooper this is especially for Telugu movie buffs.

“With due respects, this is like posting a Amitabh Bachchan’s picture when another person by that name dies. How can such an experienced and respected journalist be so slipshod? I think this is a reflection of what entertainment journalism in India has come to,” a prominent young Telugu actor told me angrily.

This would be designated as the the acme of cinema illiteracy. One may be excused for not knowing what Chiranjeevi Sarju looks like. But surely every Indian who is has ever visited a movie theatre, sat before a television set or browsed on the internet knows what Chiranjeevi looks like!

Along with Amitabh Bachchan and Rajnikanth, Chiranjeevi’s is the most recognizable face of Indian cinema. How can this kind of irresponsible reporting be excusable in a writer who has been commenting on cinema for 50 years? The Gandhi in TikTok: Inside Scoop 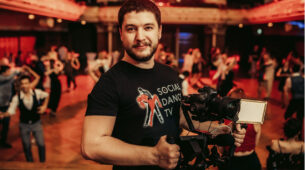