The worst decision of Sushant Singh Rajput’s all-too-brief life was to leave Ankita Lokhande. When Sushant was dating and living-in with Ankita Lokhande he was a different person. Warm affectionate full of life and with an insatiable zest for life, Sushant was a man deeply in love and Ankita Lokhande was his guiding light.

Once when I asked him to define his feelings for Ankita Sushant said, “Ankita is the only factor in my life that makes me believe in destiny. How we catch what life throws at us is destiny. Ankita is my destiny.”

We had conversations about his future plans, and they always involved Ankita. When I would ask about their marriage plans Sushant had the same reply each time: “We are married to one another in every sense. There is nothing that a formal ceremony can change between us.”

But then the two families began to pressurize the couple to make it legal.

One day I got a call from Sushant. He was very in an unusually serious mood. “Sir, shaadi karni padegi. We are definitely getting married next year(this was in 2016). A formal ceremony is what both our families want. So we will have two weddings. One in Mumbai and the other in Indore (Ankita’s hometown).”

He was exuberant, excited, unstoppable. Then it ended. Suddenly all plans changed. The relationship was called off. To this day, no one knows why. Sushant didn’t tell me. After Ankita left his life he began to change. He became more secretive, less enthusiastic about life. The will to seize the day had subsided.

Sushant moved on and so did Ankita…Or that’s what they seemed to believe. I believe they never stopped loving one another, that Sushant missed Ankita to his dying day. That the relationships that he shared with some women after his split with Ankita were on the rebound. Somehow Sushant never got over Ankita. He wasn’t meant to. They were a couple for keeps.

What separated them, I don’t know.I’ve heard several theories on why they separated, blaming both Ankita and Sushant. I don’t know what went wrong between them. But I do know that a little bit of patience would have weathered the storm. That if they had stayed together, as they were meant to, Sushant would not have died. He would have been with us today.

The big fatal mistake of Sushant’s life was leaving Ankita. I remember he once told me, “There are couples who are committed only to the moment. They don’t want to take responsibility for their future together. But for me there is no uncertainty. My future is with Ankita.”

Once they parted, Sushant’s future became hazy and blurred. She was his guiding light in the truest sense. Even if Sushant decided to quit in an impulsive moment, Ankita should have stayed on. The truth is, Sushant gave up gold for a gold-digger. 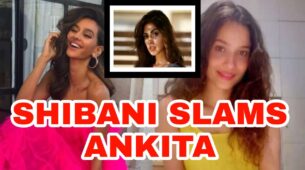