Arijit Singh, the voice behind Tum Hi Ho, became an overnight sensation with the release of Aashiqui 2 and is a guy to have become a necessity now. Be it romantic or something else, there has to be an Arijit Singh song as part of the movie. A guy to have his songs played right from weddings to any tapri shop, he took the industry by storm.

Arijit Singh is an amazing singer to have taken a huge population into his enchanting charms. A voice filled with not just sophistication but also pain, he just knows how to sing it right. He is a figure of inspiration to many who aspire to be like him.

Though there is not much known about the first marriage of Arijit Singh, his second marriage to his childhood sweetheart Koel Roy was such a buzz. Since their secret marriage in 2014, they have been living happily ever after. He is quite reserved when it comes to his personal life and so there is no clue of his first marriage and also his second marriage, as well as minimal details. He is a guy to stay out of celebrity drama.

Arijit Singh had his second marriage at Tripathi Temple at West Bengal. They had a traditional Bengali wedding. Arijit Singh lives a very simple life and is a very reserved person. His first marriage is still a mystery to all of us and no one has any idea about his first wife. Koel Roy has a daughter who loves Arijit Singh’s songs. 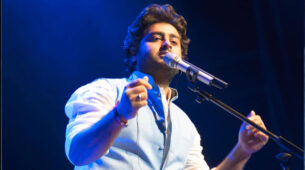 10 Arijit Singh's Songs You Need to Hear on Spotify