Know why Alia Bhatt went viral on the internet. The beautiful and cutest star of Bollywood, Alia Bhatt, is slaying the industry and has amazed us with her acting skills. She has become the highest-paid actress and a most popular actress in the industry. She made her appearance with Student Of The Year in 2012 and has appeared in several films. The actress has also stunned us with her melodious voice and has sung songs in her movies.

She is just an amazing actress who looks mind-blowing. She never fails to amaze us with her kind gesture towards other people and makes us fall in love over and again. Alia Bhatt was seen sending flowers and a Congratulatory note to Kangana Ranaut as she was honored with Padma Shri by the Government of India. The kind gesture towards Kangana was just marvelous, and her fans were amazed. Kangana’s sister tweeted the pictures and shared it on social media, and her fans were overwhelmed with the kind gesture of Alia Bhatt towards Kangana making Alia Bhatt was viral on the internet. 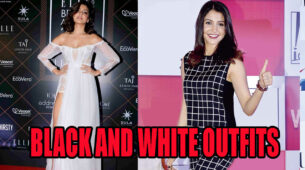 Anushka Sharma Loves Black & White & These Pics Will Prove It