These Hollywood singers are the most followed on Instagram. Check them out! The Barbadian actress, singer, and songwriter, Robyn Rihanna Fenty has been one of the most popular singers in the industry. She has made her name with her songs like Umbrella (2007), Diamond (2012) and Work (2016). And, it can be seen when someone checks her Instagram handle. Her Instagram username is @badgalriri with 80.9 million followers. She follows 1,436 people on Instagram.

so honored and proud to be the recipient of a British Fashion Award in the category of Urban Luxe! shout out to my incredible @fenty team, and my @LVMH partners! It’s been less than 7 months and we did it! 💪🏿 gang gang! @britishfashioncouncil thank you for this acknowledgment, I’ll never forget this moment! photo credits: @jenohill, Darren Gerrish @gettyimages, Jeff Spicer / BFC @gettyimages, Gareth Cattermole / BFC @gettyimages

Whereas, Taylor Swift, the popular American singer, and songwriter, has made everyone go crazy with her songs like Blank Space (2014) and Love Story (2008). She has recently dropped her new album ME! (2020), which has been a huge success. But, apart from that, she has been an Instagram sensation too. Taylor has over 130 million followers, but she follows backs none.

🎶 I enjoy nights in Brixton 🎶 …but especially when they’re like last night – @nmemagazine you really know how to have a good time. Met @clairo @radvxz and @fkatwigs who are amazing. Got to tell @robynkonichiwa she’s the melody queen of my musical heart. I got sprayed by champagne when people won & got to take another middle finger trophy home to the felines. Thanks for having me!! 🇬🇧🍾🥂 📷: @gettyentertainment @hogieaaa__

Well, Beyoncé, another famous American singer, and songwriter goes no less than others. She is regarded as one of the best music selling artists of the Hollywood industry. The celebrity has over 144 million followers on Instagram. But Beyoncé doesn’t have any followings.

Last but not the least, Lady Gaga, the eminent music artist of the industry has made everyone go wild with her songs. She is known for her unique fashion sense. Gaga has 40.7 million followers on Instagram. Her feed is filled with her fashion experiments and influencing photos. Top-rated Rihanna's classics to be remembered 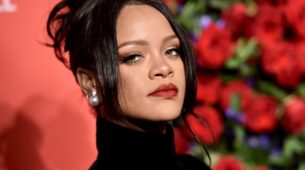 Rihanna's Songs For Every LOVER!