Check out the strengths and weaknesses of the Kolkata Knight Riders (KKR)! Kolkata Knight Riders (KKR) is one of the strongest teams in the Indian Premier League (IPL) with a total of two champions trophy on their name – 2012 and 2014. The franchise is owned by Bollywood actor Shah Rukh Khan, actress, Juhi Chawla and her spouse Jay Mehta. The team is brilliantly captained by Dinesh Kartik. KKR has done well on the field with their powerful performances. The team which is close to all the Bengalis has won millions of hearts by their powerful performances every year. But, why is it that KKR didn’t win for the third time again? Well, there are a lot of strengths and weaknesses that every team has, and so do KKR.

The two-time champions, KKR has got its biggest strength, the Jamaican power, which includes Andre Russell and Sunil Narine. The second one being the captain, Dinesh Kartik himself. He is a great captain and has also led the team well in the past years. Although he is a fantastic captain, the only problem lies in his experience, which leads to a problem while taking up a decision during a heated situation. This year in IPL 2020, the team has got England captain Eoin Morgan which is going to be the biggest strength this year. Other than that, talking about any more weakness, then the line-up is going to be definitely one.

What do you think? Comment down your views below! 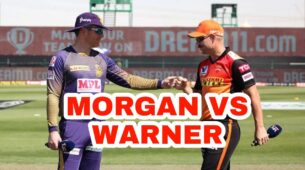