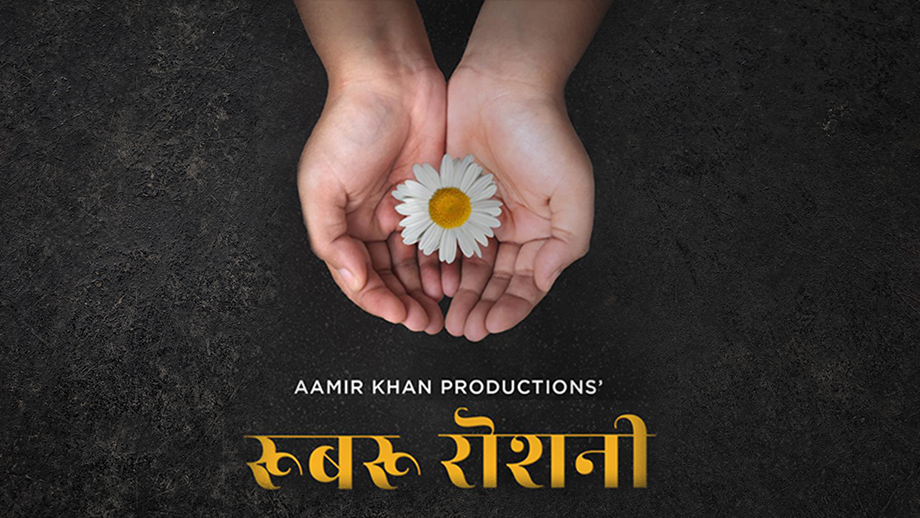 Though a bit late in the day, we decided to review Rubaru Roshni for our readers. Because, ever since its Republic Day release on the 7 channels of the Star Network, the buzz around Rubaru Roshni, Aamir Khan’s unusual offering to audiences, has only increased instead of abating. Courtesy its availability on Hotstar, more and more audiences have watched the quaint, almost-two-hour movie and logged in to social media to sing paeans to its intensely forceful storytelling. Even a cursory glance at social media will tell you that Indian audiences are quite taken with Rubaru Roshni. And where there’s buzz, there’s IWMBuzz. So it was fait accompli that we review it.

Were you to call Aamir Khan Merlin the Magician of Bollywood, you would be right on target. For, if there is one person who has perfected the knack of conjuring up fantastical tricks out of thin air, much like the aforementioned wizard of yore, it is the self-effacing Khan. Never mind the fact that his tricks are less about pulling bunnies out of a top hat, and more about delivering brilliant stories that hit bull’s eye with unerring precision. Only, in Aamir’s case, bull’s eye often doesn’t mean getting the cash registers ringing. It means hitting a raw nerve in his audiences, or making the chords of their heart sing. Aamir Khan has converted this knack into a finely-honed skill of mythical proportions, such that when he announces a movie under his banner Aamir Khan Productions, his amenable, anticipant audience waits with bated breath to see what trick he will pull out next. And Aamir never disappoints.

He’s done it again with Rubaru Roshni. Directed by Svati Chakravarty Bhatkal, Aamir’s collaborator on that other seminal feel-good programme, Satyameva Jayate, and produced by Aamir and Kiran Rao, Rubaru Roshni slams home the message, in the gentlest way possible, that darkness cannot drive out darkness; only light can do that – the tender light of forgiveness. In a world filled with hate, it teaches us that, to quote Maya Angelou, “Hate, it has caused a lot of problems in this world, but it has not solved one yet”.

This tale of crime, retribution, redemption and finally, catharsis, is at once hard-hitting and soul-stirring. It pieces together the true stories of three, very different people from diverse walks of life, bound together by the common thread of losing loved ones to blood-curdling hate crimes. Plucked from a period of three decades, from 1985 to 2008, all three stories end on a heart-warmingly positive note – with the victims of the hate-filled crimes forgiving the perpetrators; forgiving of their own accord, and with no conditions applied.

How many of us would have it in us to forgive the person who shot your parents dead? Who pumped 28-30 bullets into their bodies, rendering you an orphan at the tender age of 6? I’m sure, none of us. But Avantika Maken does it, whole-heartedly and without rancour. Hers is the most touching and heart-rending of the three stories, more because it lays bare the suffering of a mere child, who lost her parents, and consequently her entire childhood, to a mindless act emanating from hate.

Titled ‘Orphan and the Convict’, it details the story of the 1985 murder of Congress politician Lalit Maken and his wife, Gitanjali Maken, at the hands of Ranjit Singh Gill (aka Kukki). In a series of talks with Avantika and Kukki, alternating between the two, Ms Bhatkal coaxes them to share eye-opening insights into the mind and life of the victim of a hate crime, as well as that of the man who so easily picked up a gun with the singular intention to murder. In a chilling recollection, Avantika shares that as a child, if someone would’ve asked her what she wanted to do when she grew up, she would’ve answered that she wanted to kill the man who murdered her parents. Such was the anger and hate she had, pent up and simmering within her. She relates how, ever so often, she was branded an orphan by insensitive relatives; and how she married the wrong man the moment she turned eighteen, all because she needed someone in her life to call her own.

Her friends recall how she came to the first day of boarding school, holding her dead mother’s vanity tightly in her hand. In another chilling shot, Avantika shows us the pendant her mother was wearing at the time of her murder, with red-black streaks of clotted blood still intact on it, declaring that she will never wash the pendant in her lifetime. Her revelations are guaranteed to bring tears to the eyes of the most hardened of souls.

Simultaneously, we view the entire murder, and the events leading up to it, from Kukki’s perspective. Today’s generation is hardly aware of the state of the country in the aftermath of Indira Gandhi’s assassination, and the bloody riots that followed against the Sikhs, let alone the political machinations behind it. After a certain point in the narrative, even as we sympathize and feel for Avantika, our heart does not want to condemn Kukki as a criminal, and we feel the stirring of empathy for this soft-spoken, reformed killer. Kukki’s disclosures reveal less about his crime, committed in the heat of that aftermath, and more about human nature, the burden of guilt and the value of true freedom. He ends by saying that if history were to repeat itself, his reaction would be as passionate, but his actions would have been different.

The way Avantika exorcises the ghosts of the past, forgives Kukki, strives for his release from prison and helps his subsequent reintegration into mainstream life, is a moving reinforcement of the power of forgiving and letting go of resentment. Brilliant stuff this! As they say – when we don’t forgive, we’re not hurting the other person. We’re only hurting ourselves.

The second story, titled ‘The Farmer and the Nun’, details the gruesome 1995 murder of 42 year old nun, Sister Rani Maria, at the hands of a poor, disillusioned, brainwashed farmer, Samandar Singh. As Bhatkal talks to Rani Maria’s sibling, Sister Selmi, and to Samandar Singh, we learn more about the caste and class politics that rule the villages of India. Ms Bhatkal gets Samandar Singh to describe in vivid detail how he was instigated by influential moneylenders to kill the gentle nun, and how he dragged her down the bus and plunged his knife into her, 54 times. It is a powerful narrative, enough to give one goosebumps.

Samandar Singh speaks with candour and his words have a ring of honesty. It is as if by sharing everything with Bhatkal, he can get the toxicity of his crime out of his system. He ponders and ruminates before us, sharing sublimely portentous insights into living with the burden of his guilt. Again, his weathered, dejected countenance, coupled with his candour and lack of artifice, touch a chord within us, and we find ourselves empathising with him and the situations that led him to commit the crime.

Simultaneously, Sister Selmi shares how she steeled her emotions and readied herself, mentally and spiritually, to forgive her sister’s murderer. The story ends on an inspiring, uplifting note, conveying in definitive fashion, that given encouraging circumstances, a criminal can redeem himself, and deserves a second chance at life.

The third story, called ‘Terror and the Mom’, narrates the story of an American woman, Kia Scherr, who lost her husband and daughter in the 2008 Mumbai terror attacks. In an emotionally-choked heart to heart with Svati, Kia shares how, in the days after their killings, she was flooded with messages of hope, love and strength from across the globe, including radical Islamic nations such as Iran and Pakistan. The love pouring in from all corners of the world and her own inner strength helped her in cleansing her soul of the overwhelming feelings of hatred, and finding it within her to dedicate her life to spreading the message of peace, love and forgiveness.

Though this segment misses the candid introspective talks with the perpetrators of the crime, that had given the first two stories such a deeply profound texture, it more than makes up for it by sharing with us hitherto unseen footage of the cross-examination of Ajmal Amir Kasab, the lone terrorist who had been captured alive. Kasab’s narcotics-induced confessions establish the motive that drives terrorists to kill, and more often than not, it is poverty and religious brain-washing.

The stand-out feature of the distinctly unusual narrative that is Rubaru Roshni, has to be the complete lack of judgement on the part of Svati, as she coaxes her interviewees to open up to her. It is a testament to her vast capacity for sensitivity and empathy that neither of the two ex-convicts she talks to feels any shame in sharing the intricate details of the crimes he committed. Neither feels the need to look away, with both being comfortable to look her in the eye while they converse with her. Svati Chakravarti Bhatkal deserves plaudits for helming this very difficult subject with brilliance and dexterity. She has ample support from the editing department. Hemanti Sarkar’s editing adds an element of urgency to the narrative, giving it pace and direction.

The narrative is enhanced by Shanti Bhushan Roy’s cinematography, which is ethereal. Billowing dust and overcast skies; the utter lonesomeness of dry barren lands; trees undulating in the wind, as if giving testimony to all that took place in their vicinity and the surprising end to those happenings; everything is captured with an astute sensibility and a deft hand. The cinematography gives an atmospheric feel to the stories, elevating them to another plane altogether.

Astonishingly, if there’s something that fails to make much of an impact, it is Aamir’s narration. In fact, we hardly notice the voiceover, delivered in Aamir Khan’s trademark dulcet tones. It must be a first for the actor too, when viewers take no notice of his omnipresence in the show as its narrator. This, in essence, says a lot for the narrative’s vice-like grip on our senses, as we lose ourselves in the flow of the bewildering reality of the events unfolding before our eyes.

Rubaru Roshni gives hope that the human race stands a chance of redeeming itself, absolving itself from the shackles of hate, politics, religion and the abominable reality of an eye for an eye. With the help of yellowed newspaper articles, grainy pictures and moving images, it delves deep into the psyche of the people who committed those crimes, trying to understand where they came from. And in the process, it makes shocking revelations; about the anatomy of crime in particular and human nature at large. And as we watch the life, times and emotional makeup of these people unspool before us on screen, it triggers a corresponding avalanche of emotions within us. Yes, they’ve committed a crime, but they can’t be branded as criminals per se.

In a moment of epiphany, we realize that these people, who’ve committed these seemingly heinous crimes, are as human as each one of us. We realize that they are victims themselves; in an ironically twisted way, they are the unfortunate victims of their circumstances. That is what Avantika, Sister Selmi and Kia Scherr realized too. But more than that, they realized that without forgiveness, life is but an endless cycle of resentment and retaliation. And when they did, that is where hatred ceased and healing began.

We at IWMBuzz.com rate Rubaru Roshni with 4 out of 5 stars.