The upcoming episode of Taarak Mehta Ka Ooltah Chashmah (TMKOC), produced by Neela Film Productions Private Limited, is an absolute laughter riot. Taarak Mehta gets trapped in a game of lies with his ever vigilant boss over taking the day off from work, all to oblige Jethaa Lal. With the boss smelling something suspicious about Taarak Mehta’s sudden need for a leave for a day, he repeatedly keeps demanding to talk to Anjali to verify Taarak Mehta’s claim of his wife being unwell. Making matters worse, as Taarak Mehta keeps dodging his boss’s telephonic interrogation, Jethaa Lal who is standing right next to Taarak Mehta tries to help his friend by trying to mimic a sick Anjali Mehta by loudly coughing and sneezing in between the conversation.

The story behind Taarak Mehta taking a leave from work actually is Jethaa Lal. It has so happened that Sundar Lal has arrived in Mumbai and has asked Jethaa Lal to meet him outside of the home. Over a phone call, Sundar Lal has made Jethaa Lal extremely uneasy about what he might tell him in person and so wants his dear friend – Taarak Mehta to accompany him for meeting Sundar Lal. He pleads Taarak Mehta, who has an important meeting on the day, to override the meeting and instead go with him for moral support. Taarak Mehta after much protest about being unable to ditch work caves in. He texts his boss asking to be excused from work for the day on account of Anjali’s ill health. This leads to all the comical cat and mouse game of the boss getting suspicious and trying to find out if his employee is merely making an excuse to skip work.

The upheaval that this tiny lie is going to create is going to open the Pandora’s Box for Taarak Mehta. And more importantly, this is only going to add to Jethaa Lal’s existing stress with Sundar Lal wanting to meet him outside  the home to deliver a message which sounds nothing like good news. The story will unravel a rather funny side but which viewers will get to watch only in the upcoming episode of Neela Film Productions Private Limited’s show Taarak Mehta Ka Ooltah Chashmah. Watch it, Monday to Friday at 8:30pm only on SAB TV. 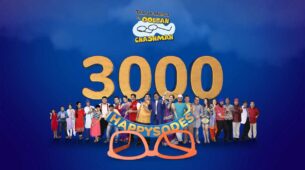