Kahan Hum Kahan Tum, produced by Sandiip Sikcand and directed by Sameer Kulkarni, comes like a breath of fresh air on television, which is crowded with plots around the saas-bahu saga, one-dimensional characters, nagins, deaths, resurrections and reincarnations. It stars Karan V Grover and Deepika Kakar in lead roles. It premiered on the 17th of June on star plus and it can also be seen on hotstar. Kahan Hum Kahan Tum is a love story between a top TV actor, Sonakshi (played by Dipika Kakar) and a heart surgeon, Rohit (Karan V Grover). While on one hand, the show takes many digs at Indian daily soaps through Rohit, on the other, it also gives the audience an insight into the behind the scenes of the TV world through its female lead, Sonakshi.

What separates this daily soap from the rest is the treatment. Not that the love story isn’t full of cliches, but the non-OTT (over the top) treatment is definitely refreshing. Characters talk like normal people, wear regular clothes, and there are no triple takes, the “Nahi Nahi Nahi” kind of repetition of dialogues, the 100 reaction shots or other such daily soap tropes that have come to define the genre in India. We also get to see the leading lady at work a lot more than we generally do.

It doesn’t mean that Kahan Hum Kahan Tum doesn’t have drama, it has tons and tons of drama but no melodrama which is the best part about it. Kahan Hum Kahan Tum Is definitely a step in the right direction for TV, as every genre, including daily soaps, need to evolve with time by taking a few risks, and thus contributing in the evolution of Indian television.

Dipika and Karan’s fresh pairing also looks quite interesting. Both of them have perfectly portrayed their inner vulnerabilities. 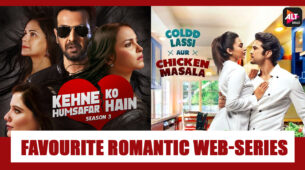