Today’s Bepanah Pyaar 26 August episode begins with Pragati (Ishita Dutta) entering her room but didn’t find Raghbir (Pearl Puri). He entered just then. She went downstairs and looked him in his eyes. She recalled what happened in orphanage and was angry. He talked to her about Priya. Raghbir talked about what it meant to love someone. She asked her to help him. She doubted his intentions and agreed to be on his side to keep an eye on him. He came home the moment he entered which meant he had hid it right now itself. She will find them. He told her to fit a chip in her mind. She shook her head. His idea wasn’t bad. Raghbir said the guy wasn’t bad either. They shook hands. They told a plan to Nakul and Shefali who went to get Priya ready. Pragati wasn’t eager to go but Raghbir taunted her. She wouldn’t have gone to such places before. She retorted that she had. He told her to get ready. Nakul, Shefali, Raghbir and Priya were near the car.

Priya wasn’t eager to go but they convinced her to come. Raghbir sent them in one car and waited for Pragati. She noticed him keeping small handbags in the car’s trunk next to a black bag. She tried to peek inside but he closed the door. She couldn’t wear saree to the place where they were going. She said there was no harm in it. He told her to put a tilak and get a thaali too. They were going to Mata Rani’s jagran. She said everyone would praise her. He said that can happen only when she will be allowed to go inside. She thought to take him inside too so he cannot hide the bag somewhere else. He kept his finger on her head. She said she was thinking what to wear. He said they won’t let her wear suit there. She asked him if it was true. He gave up on her. This was what he had been talking about. He will decide her attire.

The mystery man was hiding behind the bushes. Raghbir asked Pragati to come out. She told him she was uncomfortable but he told her to come out. He watched her mesmerized as she stepped out in a dress. He looked at her from top to toe. She hid the slit around her knee. Everyone would react in the same manner. He said he was smiling. She looked hot. He covered up saying that she was looking nice. She asked for the percentages. He told her. She tried to go to change but he told her that the one, who wore the dress, mattered. She was very beautiful. He couldn’t take his eyes off her when she entered in the room. She looked at him. She tried to adjust her off shoulder dress but he shot her an encouraging look. She smiled. They came out of the room and noticed elders playing cards. He engaged them in a conversation as Pragati walked away stealthily. They met Gopi and his wife on the way. They asked him where he was off to. Raghbir said they were going outside without realising that Pragati was hiding behind the pillar.

Gopi’s wife remarked that men forget to look behind while going out. Raghbir went to Pragati and they headed to the car. On their way to the venue, Raghbir said they should buy a tape. They can tape the slit. She thought to check on the bag. She asked about spare tyre out of nowhere and insisted upon seeing it. He replied that he cannot show it. He had killed someone and hid the dead body there. She told him to open it but he asked her if she had nothing else to discuss. She thought to check it when she was alone. Raghbir went inside. Pragati thought to find an excuse to come outside to check the trunk. She removed her earring and told Raghbir that it might have fallen inside. They both started searching for it. She said it might have fallen in the car. He told her to hide it with her hair. She denied. He agreed to check in the car. She convinced him to go inside while she headed to the car. Pragati noticed the mystery guy scanning the black bag in the parking lot. She should catch him red handed.

She headed toward him but a parking guy called out to her just then. The mystery man went missing with the bag by then. Pragati was certain he must be around. She closed the trunk and the bloodied kerchief was still on the ground. She started looking in the parking lot. There was a tap on her shoulder. She turned around in shock and found Raghbir. She said it wasn’t in the car. She was checking here. He told her to let it go. She said it was her favourite earring. He went back to the car. She thought she should have checked the trunk earlier. She noticed the piece of cloth on the floor and picked it. She dropped her earring in the back of the car when Raghbir wasn’t looking. He said it wasn’t here. She replied that it won’t be in his car. He called it public transport. Anyone who wanted to go somewhere took this car. He found her earring in the backseat. She wondered if it was Harshit. The written update of 26 August 2019 Bepanah Pyaar episode full story ends here.

In the upcoming episode of Bepanah Pyaar, watch Dev recognizes Harshit who hurt Priya. Prgai pretends to trick him and slaps him. Stay tuned! 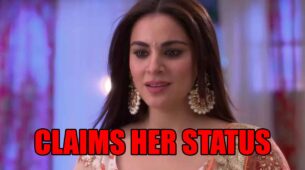